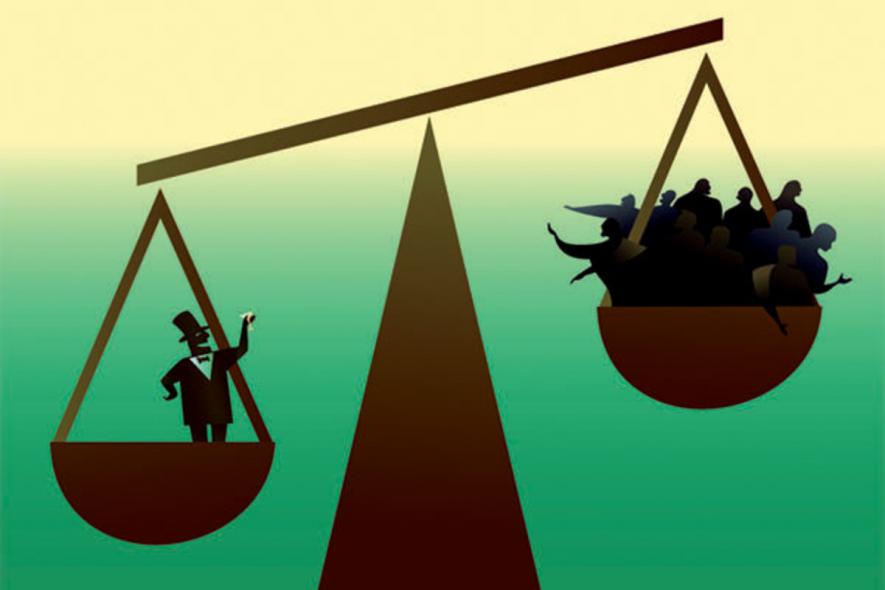 Much has been written about the immense increase in economic inequality that has taken place in recent times and various startling figures have been provided by organizations like Oxfam, which has just released a report called Inequality kills. This shows that the wealth of the 10 richest men has doubled since the start of the pandemic while the incomes of 99% of the world’s population are now lower than before the pandemic. It is estimated that just 0.027% of the world’s population had a combined wealth of $45 trillion in 2020, more than 15 times India’s current Gross Domestic Product or GDP.

Some have even asserted that the contemporary world is characterized by highest level of economic inequality ever seen in human history (MR online, 12 February). This assertion is by no means implausible. Since any social system needs production and the producers must benefit from a minimum of subsistence, there is a floor to which even the poorest must have access, whatever the level of their labor productivity; and this is true even of earlier social systems.

The obvious argument against this view would be that with the development of the productive forces, there would also be an increase in the real wage rate of productive workers, so that the share of economic surplus, and therefore the level of inequality which is usually a derivative of it, need not increase under capitalism relative to earlier modes of production.

But if we see capitalism in its international framework where it causes deindustrialization in its periphery and thus accumulates massive reserves of labor that keep real wages fairly close to a subsistence level despite the substantial increase in productivity of labor, then it follows that inequality defined in terms of the share of surplus in world as a whole would be much higher under capitalism than under previous modes of production, precisely because of the greater development of the productive forces that it induces compared to previous modes.

But even though inequality in this sense is greater today than at any time in human history because of the capitalist mode, just three decades ago, there were societies where inequality was lower than ever before in human history. I refer, of course, to the former Soviet Union and the other socialist countries of Eastern Europe.

After the collapse of socialism in these countries, it became fashionable to speak of them as effectively no different in this respect from the capitalist countries, with an “apparatchik” who lived off the surplus exactly as the capitalists do. . But this attempt to erase the differences between the two social systems in terms of inequality is a dishonest, factually erroneous ideological maneuver. On the contrary, the contrast between the two systems in terms of inequality is simply unimaginable.

Max Lawson of Oxfam quotes Branko Milanovic, a Yugoslav-born economist, to show that inequality in Eastern European economies (although he uses a different measure than the one I have used here above) was much less at that time compared to West Germany, France or Denmark, not to mention the United States where, of course, it was much larger.

And this lower inequality, according to Milanovic, was due to at least three factors. The first was the massive expropriation of private property, especially feudal, after the Bolshevik revolution, and its distribution among the peasants; a similar land redistribution was carried out in many other Eastern European countries after the war.

The second was the fact that Everybody had access to free education and health care. Each student received not only free education but also a stipend to study, and since there were no private colleges and universities, all received the same education and had the same opportunities for advancement open to them; there was no question that some students, from a so-called “affluent” background, were better placed than other students.

And the third factor was guaranteed employment; everyone was assured of a job, there was no question of some remaining unemployed and constituting a reserve army of labour, as is the case under capitalism.

However, these factors, while important, do not fully explain the greater equality under socialism. These must be supplemented by the very logic of the socialist system which has prevented any increase in inequalities. The economy still at full employment gave the former socialist economies a fundamentally different dynamic from that of capitalism.

Under capitalism, the distribution of income is determined separately and independently, by negotiation between workers and capitalists, in which the workers are handicapped by the existence of the reserve army: the more the relative size of the reserve army is greater, the lower the wage share that workers receive. can get by their haggling.

These independently given shares of workers and capitalists in production are the reason why there are crises of overproduction in capitalism. If the relative share of workers, i.e. their real wages divided by labor productivity, is, say, one-half, and the total productive capacity of the economy is 100, then 50 would return to the workers and 50 to the capitalists. if full output capacity is produced.

The workers consume more or less what is theirs; but if the consumption of capitalists (including the consumption of their “parasites”) and investment, which are decided independently, add up to only 40, then only 40% of the surplus will be “made”, and, since the surplus share is half, the workers will get 40 and not 50, and the total “achieved” output will be 80. This means that 20 of the producible output will remain unproduced, and if the labor productivity is, say, by 1, then 20 more workers will be unemployed in addition to those who would have been unemployed anyway if 100 had been produced.

In a socialist economy, however, if the sum of investment and consumption of state personnel, including managers (there are no capitalists and therefore no consumption of capitalists) is 40, so production will always stay at 100 i.e. at its full capacity level and the extra amount will just be given to the workers. The workers’ share will be adjusted upwards, so that they get 60 by falling prices relative to nominal wages. In other words, the workers’ share, instead of being given independently, is itself flexible, always adjusting so as to achieve full productive capacity.

Thus, while a capitalist economy experiences unemployment in the event of insufficient aggregate demand, a socialist economy never has insufficient aggregate demand because the wage share always adjusts to compensate for such a possibility. The share of economic surplus in output can therefore only increase secularly, and consequently the share of wages in output can only fall secularly, if the ratio of investment to output increases secularly. . But even in such a case, since there are no private capitalists owning the means of production, all this increase in economic surplus accrues to the state and there is no increase in income inequality or wealth between people.

Thus, the very logic of the functioning of the socialist system was such that it excluded any crisis of overproduction, any unemployment and any tendency to increase inequalities of income or wealth between individuals. What’s more, the transition to such a remarkably egalitarian system from a previous system marked by massive inequality was made in a very short time. As one of Lawson’s interlocutors put it: “You had situations where the parents were illiterate and their sons became university professors”.

Some believe that it is impossible to have creativity in a society characterized by substantial equality, because such equality undermines incentive. But this is a flawed argument for two obvious reasons. First, it is myopic to believe that the mainsprings of creative effort reside only in monetary incentives. In other words, this argument justifies a bourgeois order by making assumptions about human nature that limit it only to what is witnessed within a bourgeois order.

And second, it doesn’t count with the huge loss of creativity (regardless of the human costs involved) that is involved when the mass of the population is kept uneducated, unemployed, unhealthy and nutritionally deprived

2022-02-20
Previous Post: MANDEL: The killer is sentenced to life without the possibility of parole for 18 years
Next Post: Lawrie McFarlane: Is the “freedom convoy” a nascent political movement?