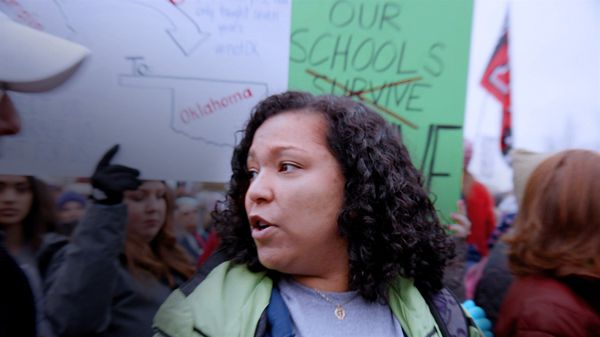 “The Big Scary S Word”: socialism as the truest expression of democracy

If you haven’t noticed that capitalism is killing us, you aren’t paying attention. Heating domes in the northwest, hurricanes in the south and northeast: man-made climate change has trivialized deadly weather events.

And where is the incentive to do things differently? As long as the 0.1% are safe from the consequences of their environmental predation, their lobbyists will ensure that business continues as usual.

If you think systemic upheaval is needed in American society, Yael Bridge’s documentary can help you persuade that democratic socialism is a practical alternative to the status quo. The big scary “S” word the usual figures of inequality run about – five plutocrats have accumulated as much wealth as the poorest 3.5 billion in the world, the American working class bears more debt than any working class in history – but concentrates his energy on the assertion that socialism is deeply American and “the ultimate expression of democracy.”

Did you know that the Republican Party was founded by socialists? That Teddy Roosevelt’s 1912 presidential platform was more to the left than Bernie Sanders’ proposals? That FDR stole the Socialist Party platform for its first presidential race? Neither do I. Bridge’s documentary beautifully demonstrates how socialism is embedded in American history. Much, if not most of our community progress – the emancipation of slaves, workers’ rights, universal education, health care for the poor and the elderly – emerged from socialist movements.

The big scary “S” word defends the current relevance of democratic socialism by following two individuals. Stephanie Price is a school-based speech therapist in Oklahoma City. Tired of working two jobs to make ends meet, in state ranking 48e In spending per student, she joined the teachers’ protests at the State Capitol in 2018. Disgusted by the soft surrender of her spokespersons, she is inspired to take a more active role in defending the rights of educators.

Lee Carter is a USMC veteran who suffered the failure of the Virginia safety net after sustaining an injury on the job. With a state legislature populated only by the privileged classes, he pays the bills as a Lyft driver while running for office as a Democratic Socialist. Once elected, even his fellow Democrats in the House of Delegates laugh at him and avoid him. Nonetheless, he persists.

In addition to assembling an esteemed group of talking heads – Naomi Klein, Cornel West, Eric Foner – The big scary “S” word takes us across the country to show us socialism in action. A trip back in time to Milwaukee introduces us to pragmatic “sewer socialism,” where decades of socialist mayors have made it America’s healthiest metropolis. A current laundry co-op in Cleveland demonstrates the happy outcome when the workers are the owners. (It’s curious how we aspire for a person, a voice in our political system, but accept feudalism in our workplaces. I’m just saying.)

Bridge’s documentary hits the drum “American as apple pie” a little too hard for my taste. His repeated claims that Democratic Socialists are not seeking to recreate Venezuela or the Soviet Union may not be xenophobic, but they do feel close to xenophobia. A change in phraseology, emphasizing instead that democratic socialism is not totalitarian in nature, would have eliminated this unpleasant aftertaste.

Nonetheless, the argument is powerful that universal health care and equality in education will not happen by trusting the benevolent condescension of trickle-down capitalism. We need more democratic socialism, and this may be the only hope to save our planet.