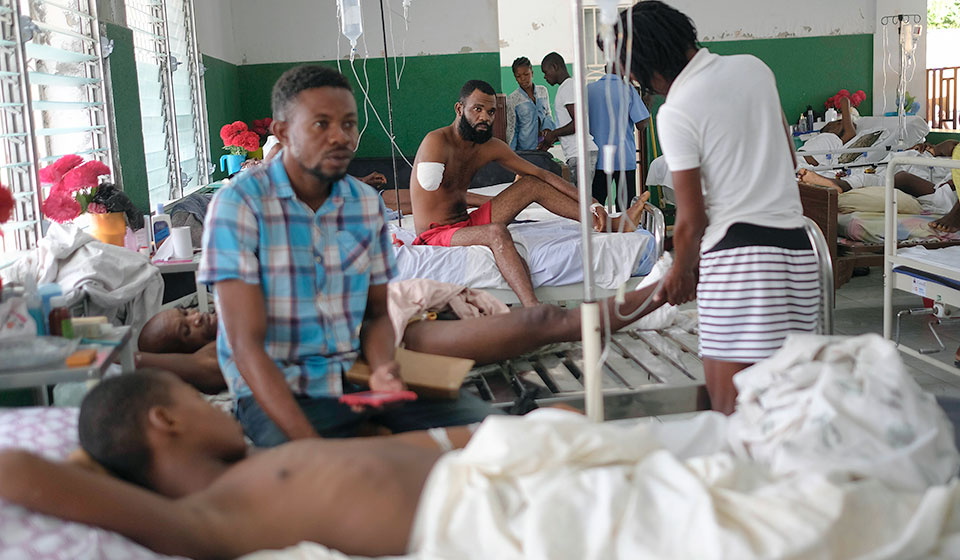 Socialism at stake as Haitians respond to disaster – people’s world

FÃ©lix Pierre Genel, 36, whose arm was amputated after being injured in the earthquake, is treated in a hospital in Cayes, Haiti, on August 25, 2021, a week after a magnitude 7.2 earthquake. The disaster was only the latest in a series of disasters that hit the Haitian people. | Matias Delacroix / AP

Conspirators in Florida employing Colombian mercenary soldiers arranged to kill Haitian President Jovenel MoÃ¯se on July 7; rivalry between Haitian oligarchs may have played a role. A deadly earthquake followed, followed by flooding from a tropical storm. Amid the chaos, emergency services are lacking in rural areas. The US Marines intruded, as the US military had also done after the 2010 earthquake that killed some 230,000 people. The unwanted effects of all of these persist.

The marginalized descendants of the rebel slaves who founded independent Haiti in 1804 are resisting, however. The turmoil of socialist ideas and practice is evident.

The assassination of Moses marked the end of ten years of corrupt and despotic rule. US Secretary of State Hillary Clinton propelled President Michel Martelly to the presidency of Haiti in 2011. MoÃ¯se, her protÃ©gÃ©, became president in 2017 on the basis of 500,000 votes drawn from six million eligible voters. Haitian political parties and their candidates serve a corrupt oligarchy.

Moses had ruled by decree, having refused to allow legislative elections. His term was to end in February 2021, but supported by the US government and the Core Group, he remained in office, defying Haiti’s 1987 constitution. He called for a new constitution that would allow agricultural conglomerates to swallow up small land holdings. Although he’s gone, the proposal is still alive.

Composed of the ambassadors of the United States, Canada, France and Brazil and representatives of the United Nations, the OAS and the European Union, the Core Group met in 2004, immediately after the progressive government of President Jean-Bertrand Aristide was toppled in a US-designed coup . Aristide was elected in 2000 with a majority of 92%.

The Core Group oversees governance in Haiti and oversees political activities in general. With a United Nations military occupation force that remained until 2017, the entity aims to maintain a Haitian status quo satisfactory to foreign powers.

For three years, aggrieved Haitians periodically organized large demonstrations. As economist and socialist Camille Chalmers has described, they have called for: relief from shortages of fuel and other goods due to the withdrawal of neoliberal-inspired subsidies, more looting of billions of funds from the PetroCaribe program of Venezuela, the resignation of MoÃ¯se, an end of American interventionism and the end of the support of the Core Group to the autocratic regime of MoÃ¯se.

In August 2019, Haitian progressives from 62 organizations met to discuss constitutional change and aspects of a transitional government. The business at hand, according to participant Chalmers, was “to establish the revolutionary left as a united force” and to develop a transitional program to deal with current political problems. They deliberated for three days and established the Patriotic Forum.

The Patriotic Forum gave birth to the â€œPeople’s Political Frontâ€ (PPF), which is now a potential vehicle for an alliance of six parties ready to participate in the elections. The alliance includes the socialist party Rasin Kan PÃ¨p La. (â€œRoots of the popular campâ€) Functioning since 2015, this party has organized street mobilizations and published statements and analyzes remarkable for their anti-imperialism.

Interviewed in 2018, Guerchang Bastia, member of the party, described the role of his party as “to be present with the masses … to develop genuine popular education …. So that when the masses are in the streets they will recognize you as a leader [with] a proposal for a new company. The aim of the left-wing organization, Bastia said, “is to create a new relationship with the masses. [and] build the strength to fight against the capitalist system.

Examining the situation in Haiti ahead of a virtual meeting of international supporters in March 2021, Chalmers outlined the tasks ahead for the socialist cause and the PPF. Founding member of Rasin Kan PÃ¨p La and frequent spokesperson, he declared that “the Haitian people must take their destiny in hand. [with] a redefinition of the patron-slave relationship maintained between the international community and Haiti, and particularly between Haiti and the United States.

Chalmers sees international solidarity as a “pressing need [required] for the success of the Haitian people in their struggle for a radical change in the mafia system installed to guarantee … the political, economic and social interests of the imperialist powers, multinationals and corrupt local elites.

According to sociologist Lautaro Rivara, a member of the Dessalines Brigade in solidarity with Haiti: â€œThe history of the class struggle in Haiti is predominantly a history of rural workers, as we can currently see in the protagonism of peasant organizationsâ€¦ in the convocation and organization of the Patriote Forum. Today, as the People’s Patriotic Front, it is the best defender of the popular classes in the country.

Rivara indicates that more than half of the Haitian population lives in rural areas and practices subsistence agriculture. Illiteracy rates remain high, and health care and education for them are rudimentary or lacking. Large numbers of needy and fearful Haitians have settled in cities or, more recently, in countries like Chile, Brazil and the Dominican Republic.

Following the example of the American military occupiers (1915-1934) in the fight against a guerrilla insurgency, the paramilitary forces allied with the Duvalier dictatorships (1957-1986), and later the American intelligence agencies, perpetrated massacres in the Haitian countryside. The now-terminated United Nations occupation force also led a counterinsurgency mission, according to Chalmers. Privatized paramilitaries were responsible for many murders during the Moses era.

Regarding international solidarity, Chalmers praised the contributions of the Cuban government and people; the Bolivarian revolution of Venezuela; Jubilee South, based in Latin America and the Caribbean; and the Dessalines Brigade formed by the Brazilian Landless Movement and Via Campesina.

Via Campesina recently published a report on the grim Haitian realities. Accessible here in English, it describes the factional fighting between the adherents of former Presidents Martelly and MoÃ¯se over the disposition of funds stolen from PetroCaribe and foreign reconstruction funds following the 2010 earthquake. , such politicians would work overtime to defeat any popular mobilization.

The US government is also inclined. The report accuses US agencies of complicity with corrupt sections of the Haitian government by turning a blind eye to the profits from drug trafficking. He asserts that “imperialism wants a new Haitian constitution to allow transnational corporations to buy land legally and openly in Haiti in order to squander and steal the state’s natural resources.”