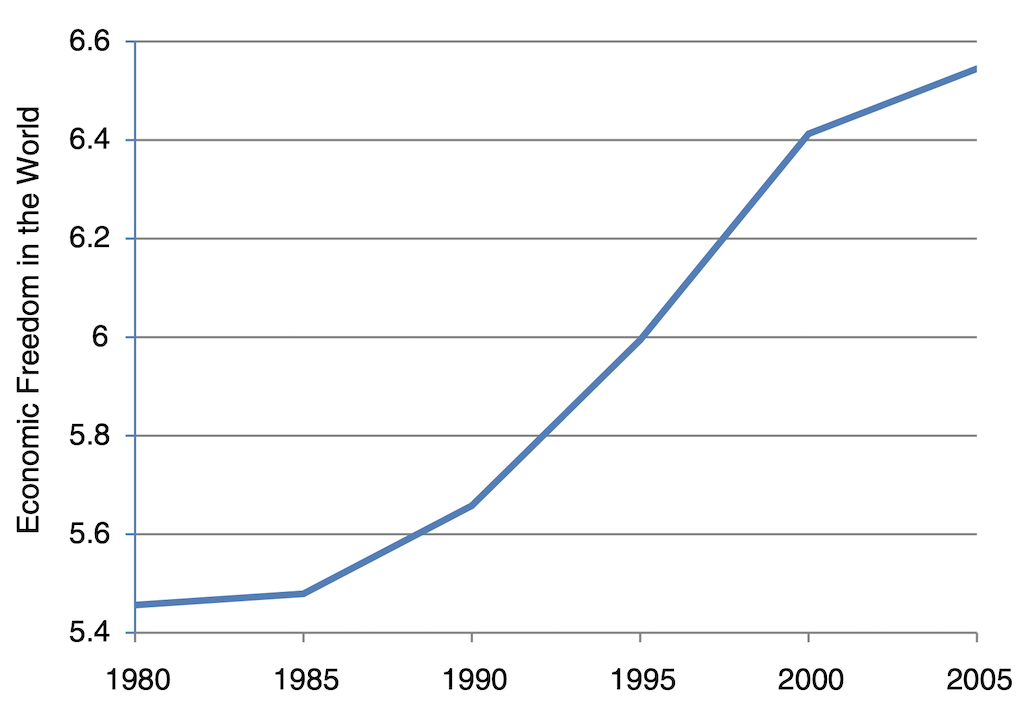 Rankings of “economic freedom” tell us nothing about capitalism

Defenders of capitalism love the Fraser Institute. Libertarian philosopher Jason Brennan, for example, made extensive use of rankings in the context of criticizing the arguments of Marxist philosopher GA Cohen. Brennan argues that given all the positive things that come with greater economic freedom, the debate over the superiority of capitalism over socialism has a clear winner: the pro-capitalist side. The only question that remains is whether socialism would be better in a hypothetical world where humans are less selfish and lazy.

While many relationships in the social sciences are unclear, the relationship of capitalism to development is not one of them. Unless you are ashamed of unprecedented income increases, longer life expectancies, greater education and greater political freedom, there is no reason to be a milquetoast defender of capitalism.

These are bold statements. And if you just look at the many charts from the Fraser Institute and assume that the x-axis is really about something called “economic freedom” (or, in Leeson’s parlance, countries becoming “more capitalist” and “less socialist” ), The data does seem to prove that people live longer and are more prosperous, more educated and more politically free in more capitalist countries. How, then, could one be a socialist? How could anyone even be a social democrat, aspiring to curb “excessive” or “runaway” capitalism through expansive social programs and a regulatory state? The more capitalist a society, the better the results.

There is only one problem with all of this. The premise is absurd. Even a quick glance at the Fraser Institute report reveals that the numbers that emerge from their methodology bear no relation to anything argued between Social Democrats, Socialists, and supporters of laissez-faire capitalism. To do.

First of all, however, it’s worth stopping to talk about definitions. Many socialists believe that a fully socialist society is one in which the workers control the means of production. Since there has never been a society where even a large part of the economy has been placed under the control of the workers, the degree to which a society is socialist in this sense is difficult to measure. Other socialists, however, thought that state ownership over most of the economy would be sufficient. This can Be measured. There have been societies like the USSR where virtually the entire economy was state-owned, countries like the United States with little state ownership, and countries like Norway (where nearly a third of the workforce is in the public sector, and the state owns shares in many companies) that fall somewhere in between.

Likewise, we can make a distinction between “socialism after capitalism” (i.e. socialism in the strict sense) and “socialism in capitalism” (i.e. policies for which socialists all over the world have fought to improve the lives of working class people (within fundamentally capitalist structures). This too can be measured. We can compare companies based on state intervention to facilitate union organizing by workers, or the difference between health care systems like that of the United States (where only a minority of the population is eligible for public health insurance), Canada (where there is universal public health insurance but the hospitals themselves are mostly private) and countries like Great Britain, Sweden, Norway and Denmark (where most or all of the hospitals are government owned and the doctors and nurses are public employees).

Rankings comparing companies by degree of state ownership would be relevant to arguments about whether societies are better off with capitalism or with at least some forms of socialism. Likewise, classifying societies according to their health care system or degree of union friendliness would be relevant to the arguments about the reforms that socialists support within capitalism.

But all you need to do to confirm that the Fraser Institute does nothing like this is take a look at the handy interactive map on its website. Play with the map for about five seconds and you will find that Norway and Sweden are both much more “economically free” than Haiti.

You read correctly. Norway and Sweden are tied for 37th place. Haiti is in 118th place. This means that Haiti, according to the Fraser Institute, is less capitalist than either Sweden or Norway.

Pop quiz: Does Haiti have a larger welfare state than Sweden or Norway? Is there a more favorable environment for unions? Does it have a larger public sector?

These are not serious questions.

So what is going on here? The five categories that the Fraser Institute uses to judge different countries are “size of government”, “legal system and property rights”, “hard money”, “free international trade” and “regulation”.

At least four of these categories appear to have something to do with contested issues between social democrats, socialists, and advocates of “runaway” capitalism, although “property rights” are more obviously relevant than the oddly mixed category. â€œLegal system and property rights.â€ Hold that thought.

In the meantime, what is “healthy money”? Here’s how the summary describes the category: â€œInflation erodes the value of legitimately earned wages and savings. Sound currency is therefore essential to defend property rights.

This “therefore” is a bit odd, as the idea behind it seems to be that less than low inflation is essential to “defend” property rights than that it is essential for owners to obtain the benefits that they would otherwise receive these property rights. More importantly, however, the order of explanation here is the opposite of what we usually get in (misleading) right-wing arguments that Venezuela’s economic woes, for example, show that socialism produces bad. results. Usually libertarians and conservatives say socialist policies are bad because they lead to inflation. They do not define inflation itself as inherently non-capitalist.

What about the â€œlegal system and property rightsâ€? The description in the summary is too vague to make it clear what is being measured, but the full report usefully divides this into subcategories:

Of these eight categories, C is the only one that seems somewhat relevant to the capitalism versus socialism debate. And even there it is only relevant if the property is protected against nationalization (or expropriation by the workers themselves, as in the movement of reclaimed factories in Argentina in the early 2000s). On the one hand, G could also be salient, although the â€œregulatory costsâ€ that the Socialists want to impose on businesses (such as better workplace safety laws, a higher minimum wage, measures to make it harder to remove unions) rarely have much to do with the to sell enterprises.

The other six are simply irrelevant. What complaint of the Socialists against the police is that they are too reliable (H)? What socialist does not want workers to be able to sue their bosses for violating union contracts (F)? Have you met a socialist whose main complaint against the American courts is that they are too impartial (B) and independent of government (A) or that the justice system has too much integrity (E)? (For a clue to the real complaints, Google â€œSteven Donzigerâ€.) The culmination of the absurdity, however, comes from D. Do Socialists want the military to interfere more with legal and political systems? Ask Salvador Allende about this.

But that’s like saying that the Soviet Union performed badly on many standards dear to the hearts of many socialists. There is a long tradition of socialists who defend freedom of expression, for example. We would look pretty dumb if we ranked countries according to their degree of socialist using the degree of protection of free speech as one of the measures, thus giving the Soviet Union a score of “socialism.” Lower than that of the United States. . . and thus triumphantly concluding that the degree of socialism was positively correlated with protections of free speech.

This is exactly what the Fraser Institute and the libertarians who tout its findings do when they view societies as more “economically free” (or, in the hands of Brennan and Leeson, “more capitalist”) in part because ‘they are less corrupt and unstable – and then use that to argue that “economic freedom” or “capitalism” itself leads to more democracy and better political outcomes. Are there worse outcomes in societies characterized by high inflation, high judicial corruption, and frequent military coups? No kidding. It’s supposed to have what exactly to do with long-standing debates about capitalism and socialism?

Does the history of the twentieth century contain much fodder for intellectually honest critiques of at least some forms of socialism? Sure. But the Fraser Institute is only preparing the books.

2021-10-31
Previous Post: SAUL SHAPIRO: Socialism is the scarecrow of the GOP | Chroniclers
Next Post: State capitalism did not build China’s economic miracle