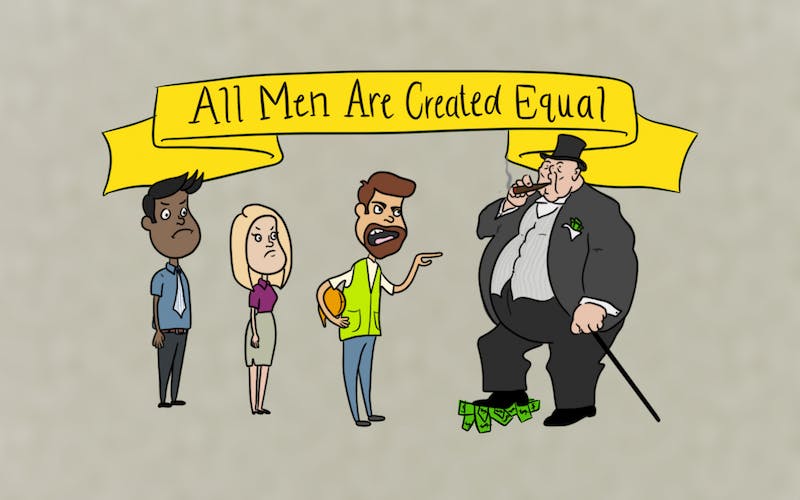 OPINION: There will never be equality under capitalism

Elon Musk, currently the world number one the richest man has always been rich. Born into enormous wealth in South Africa during asideMusk is the son of the half-owner of an emerald mine – the Musk family was so wealthy that a young Elon once walked the streets of New York with emeralds in his pocket.

Compare the white musks to the majority black population of South Africa who certainly couldn’t afford to walk around with emeralds in their pockets.

Officially, apartheid no longer exists in South Africa, but it is one thing for a government to say that all people are now equal and a very different thing for that to be the reality. After the end of apartheid, land and other assets were still largely owned by White elite. The problem of inequality persists to this day.

“Equality” is something we socialists take very seriously, and it was one of America’s first false promises – that all men are meant to be created equal, one phrasing all americans know that. Every American also knows that the teenager with emeralds in his pockets is not the financial, social or political equal of someone experiencing homelessness.

The disconnect between the homeless person and Elon Musk illustrates one of liberalism’s deepest contradictions. Liberalism – that philosophy advocating both private property and equality—cannot really have both.

A liberal might categorically deny the contradiction. While Jefferson’s Declaration of Independence does not explain what is meant by the word “equal”, the French revolutionaries who were inspired by it can give us a better idea.

First article of the Declaration of the Rights of Man and of the Citizen stipulates that “men are born and remain free and equal in rights. Social distinctions can only be based on the general good.

So maybe what the liberal means by equality is just political equality. How they can say with a straight face that the social distinction between Musk and basically everyone is based on the “general good” or the well-being of society is beyond me. What liberals really mean by equality is equality for the bourgeoisie.

Because the social distinction between those who own the means of production and the workers is so vast, there can be no political equality between them. I’ve written about this before, but working people don’t have the same opportunities to run for office as wealthy capitalists. Most workers do not have the time or the resources to become elected. And that’s just one of the many political inequalities in our liberal “democracy”.

Now there are those who say to themselves “progressivethat will recognize inequality and demand band-aids in the face of mortal wounds. They will demand universal health care, the cancellation of student loans and a higher minimum wage, among other proposals. And while none of these goals are bad, they won’t solve the underlying problem.

Like Marx noted, a forced increase in wages “would be nothing but better payment for the slave”. Progressives do not go far enough. If they really care about inequality, socialism is the cure.

When socialists say we value “equality,” we mean we value both political and economic equality. Political equality means that everyone has equal rights before the law and equal opportunities to participate in politics, and economic equality implies the abolition of the social distinction between workers and capitalists.

“The abolition of classes means putting all citizens on an equal footing with regard to the means of production belonging to the whole of society”, Vladimir Lenin wrote in 1914.

Imagine your workplace. If it’s like most workplaces, everything is run by an unelected boss who tells you and your colleagues what to produce, how to produce it, where it will go next, and how the profits will be distributed. The employer is king and his wealth reflects that.

Socialists like me suggest that the workplace should be democratically run and owned by the workers themselves. We say the workers who put emeralds in Elon Musk’s pockets should not only have all their material needs met, but also have control over their lives.

It will come at the expense of the capitalist class – it is a price we socialists are more than willing to pay for human equality.

Jared Quigg (he/him) is a sophomore majoring in journalism and political science.