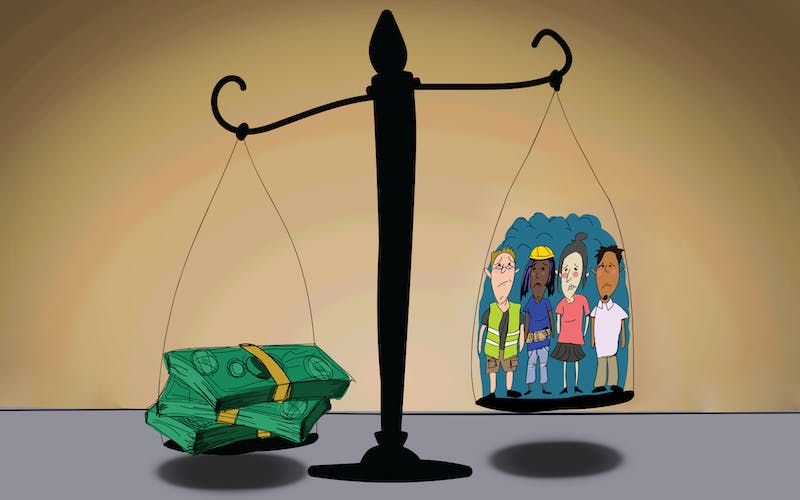 OPINION: Our market economy is better off without capitalism

In America, 10% of the population controls half of the wealth. Businesses grow to huge sizes, destroying competition from small businesses. Capitalism is doing something dangerous for our market economy.

The debate around capitalism is certainly banal. However, I want to defend the market economy and erase its name from the capitalists who falsely praise it and from the socialists who really hate it. Both parties often misunderstand this.

A lingering false dichotomy of the Cold War era suggests that a market economy is one and the same with capitalism, and that the only alternative to capitalism is Marxism, socialism, or communism. The misconception brings these complicated ideas together in a jumble of meaningless â€œismsâ€.

Defining capitalism is not easy, but it can be best understood in three consecutive parts: the private ownership of production, the accumulation of profit and capital, and then the creation of a powerful ruling class.

It should be noted modern socialism and its many ramifications are designed to be antitheses of capitalism. Modern socialism is a system under which a central power plans most, if not all, economic activity. The other â€œlibertarianâ€ form of socialism, sometimes called democratic socialism, involves businesses owned by workers who have a place in a market economy.

The problem is that a small group of bureaucrats running the economy could not improve conditions any more than a small group of industrialists could. The wants and needs of the people are too big a business for any one group to handle properly, so the system works best when democratized.

The market economy, or classical liberal economy, is a dynamic ecosystem of exchange and commerce. By its nature, it aspires to a balance between supply and demand, the investor and the issuing entity, the producer and the consumer and the employer and employee in a concept known as ” economic balance â€.

This can only be achieved if everyone has equal opportunities and respects the same rules. These concepts are often mentioned but rarely implemented. Capitalism stands in the way of a successful market economy.

Capitalism is much younger than the concept of a free market. Capitalism has hijacked the market economy and shifted it from a fluid system of regular exchange and transfer of wealth to a rigid top-down power structure, perverting individualism and endangering society. equality.

The cycle of concentration of wealth and consolidation of power in capitalism is designed entirely for the short-term gain of a minority at the expense of long-term stability for all others.

Although capitalists claim to be against government intervention in the economy, capitalists have historically reaped enormous benefits by influencing government, such as lobbying to create public policy favoring the interests of industry under the pretext of support â€œeconomic growthâ€ or â€œstimulationâ€.

Capitalism inevitably generates massive wealth inequalities in any nation because it is one-sided. With a total bias towards owners of capital, all people who do not own capital, such as the working and middle classes, are left out of the equation.

There is no such bias in the market economy. However, it works best when wealth and money flow like water and circulate throughout society. A natural redistribution of wealth occurs without the government having to force it.

According to The Atlantic, Adam Smith, known as the father of economics, who is often mistakenly regarded as the founder of capitalism, believed that the measure of a nation’s wealth and prosperity was the well-being of people. the poorest. Smith challenged the economics of colonizer mercantilism, a system that shared more in common with capitalism than Smith’s classical economics ever did.

Smith is one of our best allies in proving the illegitimacy of capitalism. He reminds us that it all comes down to power. Capitalism, like mercantilism and feudalism before it, ensures that power is concentrated in the hands of a few, but the free market system was a radical new invention that brought democracy to the economy.

Capitalism is a money-centric system, whereas the free market was made for, by and by human beings. The free market is a system like language, culture and science in that it is essential for the development of human society.

Capitalism on the other hand? We’re better off without.

Eric Reingardt (he / him) is a first year student in pre-law. He is a freelance writer with a profile on Substack.