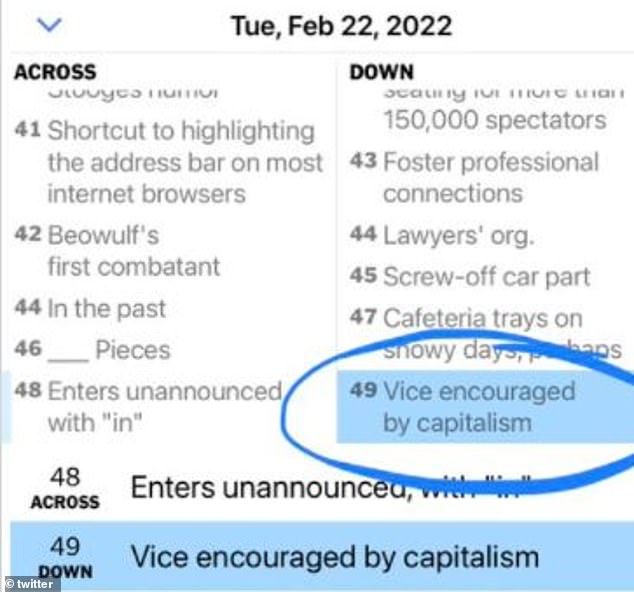 By Ronny Reyes for Dailymail.Com

The New York Times has come under fire online over a crossword clue for the word “greed” because they called it a capitalistic vice.

In Tuesday’s crossword, the Times had the clue ‘the vice fostered by capitalism‘, to which the answer was greed, sparking an uproar as people accused the paper of stoking anti-capitalist sentiments while profiting from the system .

On Twitter, journalist Clifford May, a former Times writer, tweeted: “Years ago when I worked there it was a great paper. If it stays on the current trajectory, it won’t be a newspaper at all. Just another means of propaganda.

Another Twitter user with the handle Charlie wrote, “NY Times charges for their crossword. Is this an example of capitalist greed,” referring to the company charging $6.95 for its crossword subscription.

The New York Times received online backlash for a clue on Tuesday’s crossword puzzle that referred to “greed” as a “vice encouraged by capitalism.”

Others continued to mock the newspaper for the clue, with Twitter user Clifford Asness writing, ‘Seriously NYT? Are the ridiculous opinion pages not enough for you?

Jonah Goldberg, editor of The Dispatch, also weighed in on the crosswords and what they suggested, tweeting: “Fun fact: in socialist and subsistence economies no one is ever greedy for anything .”

A Twitter user by the name of Tim Harder also joined in the mockery, writing: “Yes it is well known that before capitalism absolutely no one was greedy, ever. It’s really amazing that so many ancient languages ​​have a word for ‘greed’, since it didn’t exist.

Some even said they ended their subscription to The Times because of the crossword puzzle.

A Twitter user with the username Skipping Stone Travels wrote: ‘I just couldn’t take it anymore. I canceled my subscription yesterday.’

Another Twitter user, Emily DeArdo, wrote, “And that’s why I don’t do their puzzles anymore.” More and more they are like that.

Many also mocked The Times, while others said they canceled their subscriptions

It is the second time this month that the newspaper has drawn criticism over its global puzzles after a user complained about its handling of Wordle last week.

Wordle, which only offers one puzzle a day to keep fans hooked, has amassed millions of players since going live last October. It was created by New York-based Welsh software engineer Josh Wardle for his girlfriend Palak Shah, who loves puns.

Fans have complained that the game has gotten “too difficult” since the US newspaper took over, with previous responses like “caulking” and branding “agora” too niche for most gamers, with the answer lacking. last week causing many players to lose their victory. trail.

2022-02-22
Previous Post: The New York Times takes on capitalism in a daily crossword puzzle as ‘the vice fostered by capitalism’
Next Post: Kwankwaso launches a new political movement