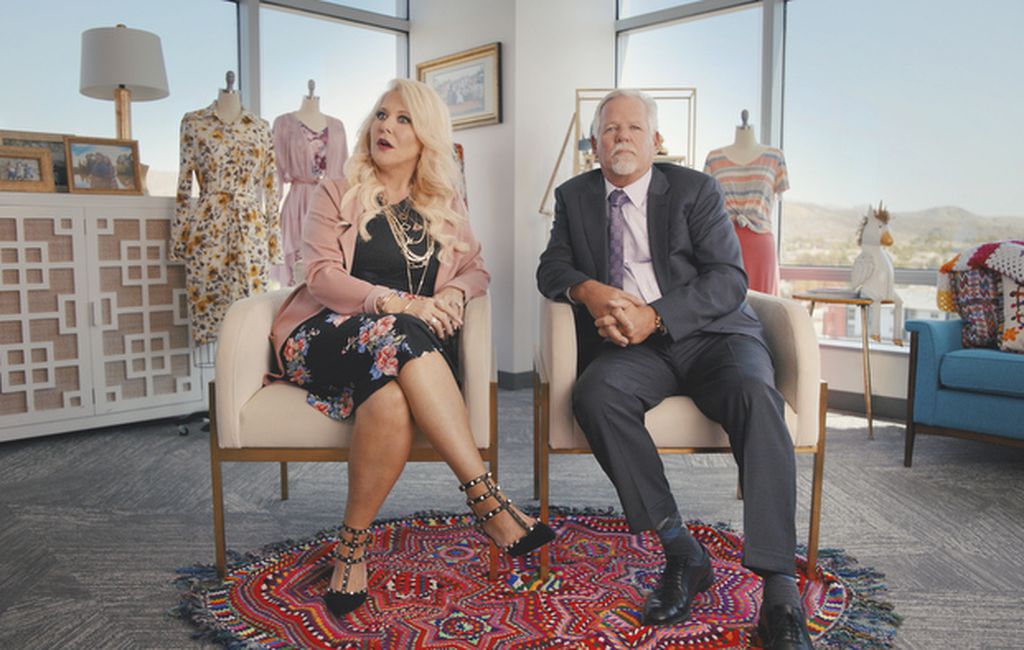 The documentary series LuLaRich from Amazon opens with an interview with DeAnne and Mark Stidham, co-founders of multi-level marketing firm LuLaRoe. They sit down and chat, not realizing the camera is already rolling – a shortcut the filmmakers have taken to signal viewers that this documentary won’t just channel the Stidhams’ point of view. DeAnne and Mark, dressed to convey prosperity, are grateful for the opportunity to tell their ‘side of the story’, but we already know they won’t get the benefit of the doubt.

In the first fifteen minutes of the series’ first episode, the filmmakers take several other shortcuts to communicate their unfriendly view of the couple. We immediately learn that they are Mormons and that they have seventeen children between them, some of whom are adopted. We learn that once DeAnne’s mother showered her children with money from the second floor landing of their house in order to claim the fruits of hard work. We watch with discomfort as Mark is moved to tears as he tells a story about his father saying he would never want to work for someone else. DeAnne and Mark aren’t likable or relatable, and the movie wants us to know that before we even start hearing how they took advantage of thousands of people to build a multibillion-dollar leggings empire.

DeAnne and Mark deliver a neat tale of how they built their business from the ground up. With wide-eyed gullibility, they describe how LuLaRoe’s business model grew out of a desire to help people, to share as widely as possible the wealth-creating opportunity they had discovered. Almost a decade ago they started producing long skirts, and later leggings, in vivid colors and patterns as cheaply as possible and selling them for a markup in a van. Soon some of their most enthusiastic customers began to buy their products wholesale and sell them at parties held in private homes. Later, these â€œretailersâ€ would pay $ 5-10,000 to start selling LuLaRoe products, while the â€œupstreamâ€ retailers who recruited them would receive monthly bonuses calculated based on the amount of products sold by their recruits. downstream â€.

It was a classic pyramid structure, and far from unique: many other â€œdirect sellingâ€ companies operate the same, marketing products like candles, cosmetics, vitamins or Tupperware. These businesses succeed primarily by addressing the special needs and wants of working-class women who wish to stay home and spend time with their children, but must contribute financially to their families to make ends meet.

In a country with no mandatory paid parental leave and very few publicly funded childcare services, women who find themselves in this double bind are incredibly vulnerable to the message that multilevel marketing (MLM) companies are peddling: that you can have it all, for an entry fee. Buying back into the business will allow you to earn a full-time salary for part-time work, from home, while being part of a supportive community. As one of LuLaRoe’s former retailers put it, â€œIn a perfect world, who wouldn’t want this? LuLaRoe updated these common MLM themes with a message of female empowerment mixed with entrepreneurial idealism (you can be a boss and run your own business!) To attract tens of thousands of women to the top of the business in 2017.

LuLaRich features interviews with two talking heads: Robert FitzPatrick, author and MLM expert, and Jill filipovic, feminist writer and lawyer as well as occasional Hillary Clinton superfan and girlboss gospel preacher. (It’s unclear why Filipovic is in this movie or what his connection to LuLaRoe is – his ID tag simply says â€œreporter.â€) FitzPatrick, who offers incisive and far-reaching critiques of pyramid schemes throughout the series, explains that the structure of MLMs condemn the vast majority of their participants: more than half of the money goes to the 1% most involved in the operation, while more than 80% of the participants have no one in touch. below them and never receive the bonus checks that are the greatest possible financial opportunity. (Sounds like a microcosm of our society at large!)

Rather than interviewing LuLaRoe retailers from the bottom of the pyramid, the filmmakers focus almost exclusively on the stories of women who rose through the ranks and earned monthly bonuses of up to six figures before the rug was taken from them. These are undoubtedly sad stories: some of these women lost their homes, cars and marriages and then filed for bankruptcy. But it’s worth noting that the film’s main reserve of sympathy is directed towards women who had hundreds of thousands of dollars on their hands before they lost it all.

The LuLaRoe retailers featured in the documentary were part of a small circle of true believers who squeezed a lot of money out of the LuLaRoe scheme, at least initially, by exploiting the women below them. Watching the movie, I wondered: what about the women who threw their savings into (or got into debt for) an initial investment that went nowhere? Who alienated their friends and family by trying to sell them leggings they didn’t want and was finally forced to admit defeat? LuLaRich does not offer much information about their experiences.

It also doesn’t offer much insight into the making. Where are these inexpensive leggings built and who is being exploited to keep up with the rapid pace of LuLaRoe’s expansion? The closest we get to hear about this is through an anecdote about a legal dispute between LuLaRoe and former supplier MyDyer, which operates factories in Asia and Central America and is owned by ex-friend of Mark Stidham. (the two shared a love of astronomically expensive racing cars). However, several employees of LuLaRoe’s â€œhome officeâ€ feature prominently: a model designer, a customer service representative, and an integration specialist. Each describes being forced to constantly work and achieve unrealistic production goals in order to generate the huge profits the Stidham family was making (LuLaRoe’s turnover was $ 2.3 billion in 2017). One can only imagine the conditions faced by the anonymous workers who made the products themselves.

DeAnne and Mark, along with many of their children and parents, held the most senior positions in LuLaRoe, only visiting the office occasionally in luxury vehicles. Their nepotism and incompetence are at the heart of the LuLaRich, which is told more or less chronologically. The image looks pink at first – large numbers fill the screen, increasing more and more to reflect the number of retailers working for the company – but along the way complaints start to crop up, like manufacturing defects. (damaged and moldy leggings), irresponsible spending on parties and concerts (Katy Perry at a rented stadium), and pressure on retailers to constantly buy more inventory.

Many former employees interviewed attribute LuLaRoe’s problems to DeAnne and Mark â€œnot knowing how to run a business of this size,â€ as if technocratic skill could have turned the ship around. The implication is that LuLaRoe fell victim to her own uncontrollable greed – that if she had just slowed things down, stayed smaller, or had better corporate leadership, all would have been fine.

But a pyramid scheme will still be a scam and a scam for the vast majority of its participants by design. The only people who will make any money are those at the top of the pyramid: founders and entry-level retailers who recruit others, like those interviewed in LuLaRich. In 2016, LuLaRoe reported that 70 percent of its retailers earned zero dollars from recruiting bonus checks, while the richest 0.1 percent earned an average of $ 150,000 per month. And it was like that Assumed work. This is also how capitalism is supposed to work, with the vast majority selling their labor to a small possessing class with little means of upward mobility.

Ultimately, LuLaRich diagnoses the LuLaRoe problem as an individual excess, not as a systematic exploitation. This may seem like a subtle distinction, but it suggests that a good restraint of selfishness can prevent the worst excesses of capitalism. As the former head office customer service rep summed up at the end of the last episode, â€œThis is what happens when you stop worrying about ethics and morals and become completely consumed with greed. ” He also describes it as a “warning from a company that has grown too fast for its own good”. But if the company had experienced sustainable growth, the result would not have been shared prosperity for all of its retailers. The best case scenario, as with capitalism itself, would have been perpetual exploitation.