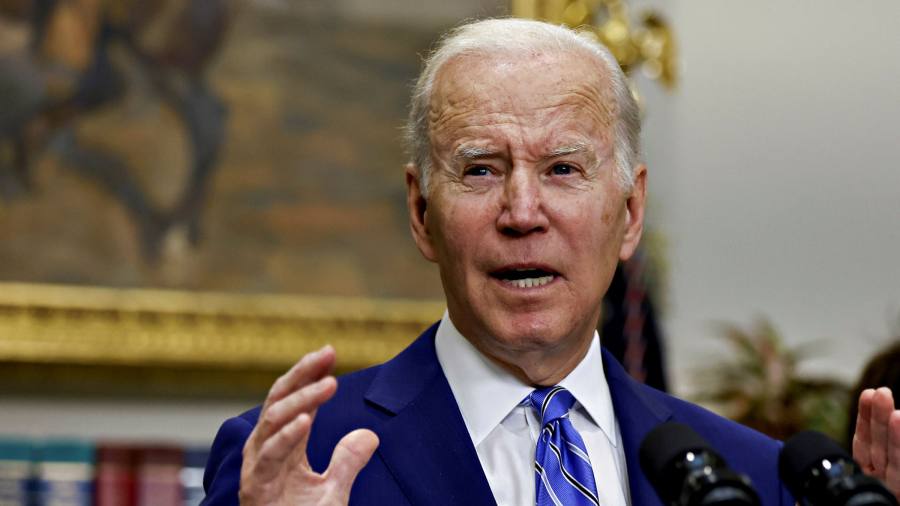 US President Joe Biden has called the Trump movement “the most extreme political organization” to have existed in recent US history, deepening his criticism of the former president’s hold on the Republican Party at the following revelations about the likely conservative-led Supreme Court decision to eviscerate abortion rights.

Biden’s comments Wednesday morning came as Democrats expressed outrage over a leaked Supreme Court draft opinion that heralded a justices decision to overturn Roe vs. Wade, the 1973 legal precedent that guaranteed the right to abortion in the United States.

The release of the document could upend political dynamics ahead of November’s midterm elections, giving Democrats an opportunity to energize their base and cast Republicans as drifting dangerously to the right and increasingly influenced by Donald Trump.

Biden and his top aides said the significance of an eventual Supreme Court decision to overturn Roe vs. Wade would extend far beyond the issue of abortion rights to other areas in which the individual’s privacy could be compromised.

The Supreme Court’s balance of power has swung decisively in favor of staunchly conservative justices after Trump’s three nominees for the court – Neil Gorsuch, Brett Kavanaugh and Amy Coney Barrett – were confirmed by a government-controlled Senate. republicans.

“What if you have a state law that says LGBTQ kids can’t be in classrooms with other kids?” Biden said in a speech at the White House. “Is it legitimate in the way the decision is written? What are the next things that are going to be attacked? »

“This Maga [Make America Great Again] The mob is truly the most extreme political organization that has existed in American history – in recent American history,” he added.

With his approval ratings still in the doldrums, partly due to voter dissatisfaction with his handling of the economy and high inflation, Biden and Democrats are increasingly counting on the mid-election campaign. -mandate of 2022 by establishing a contrast with their adversaries more than by defending their balance sheet. .

Biden also slammed an 11-point plan released by Rick Scott, the Florida Republican who is leading his party’s efforts to regain control of the Senate, as an “ultra-maga agenda” that was “extreme, as most Maga things”.

Scott’s plan seeks to counter what he calls Democratic efforts to “change or destroy” everything from the “nuclear family” to “Judeo-Christian values.” This would include severe cuts to the social safety net and force all Americans to pay income taxes, even though many low-income households owe no income tax under current law.

Biden’s comments came a day after Trump’s enduring hold on the Republican Party was confirmed by the results of the Senate primary in Ohio, where JD Vance, the former president’s backed nominee, has prevailed, setting up a general election showdown with Democrat Tim Ryan.

Jen Psaki, White House press secretary, said Biden had been struck by Trump’s control over the Republican Party and would in the coming weeks resume his 2020 campaign mantra of telling voters not to. not compare him to the “Almighty” but to the “alternative”.

“It’s clear from the latest antics that they’re at war with Mickey Mouse,” Psaki said, referring to Florida Gov. Ron DeSantis’ feud with Disney. “They are against allowing women to make choices about their own health care, against reducing the cost of prescription drugs. If this remains their platform, the president’s opinion is that it is out of step with the country’s mainstream.

2022-05-04
Previous Post: Whitmer is working with Michigan banks to offer accounts with no overdraft, ATM or balance fees
Next Post: North Koreans roll their eyes at May Day conferences on the superiority of socialism — Radio Free Asia