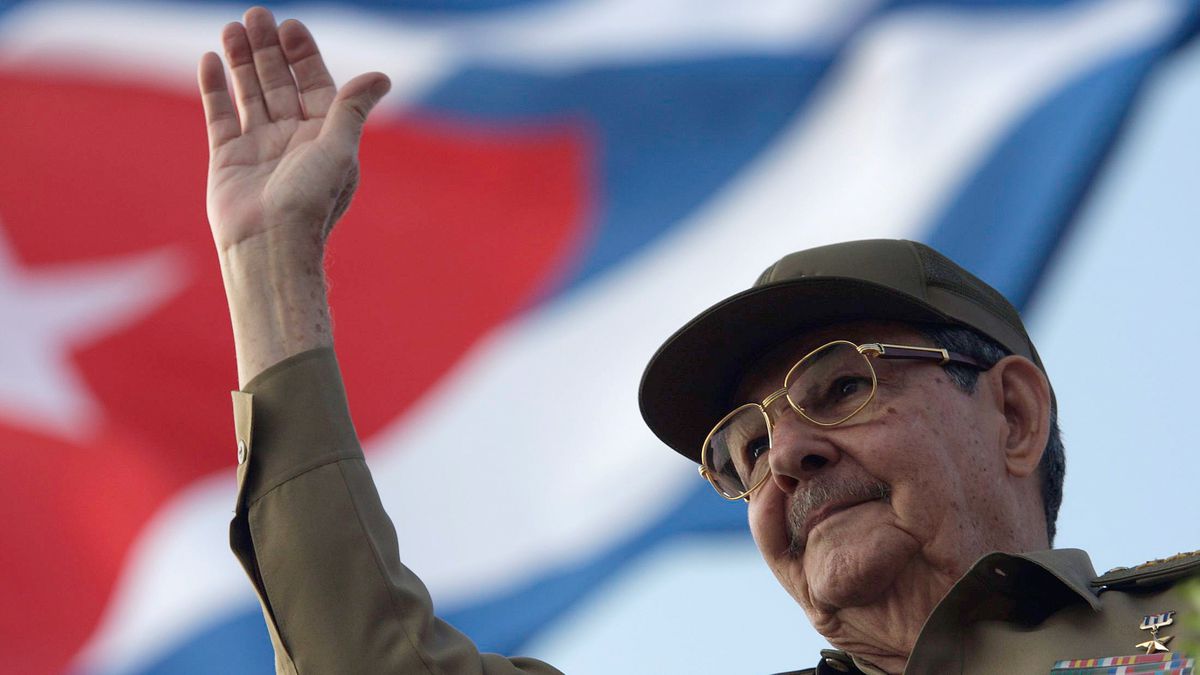 On April 19 of last year, Raúl Castro voluntarily resigned from his last and surely most important position, that of Secretary General of the Communist Party of Cuba (PCC). Nineteen months earlier, he had ceded the presidency of the country to Miguel Díaz-Canel.

Having supported his older brother Fidel, the so-called maximum leader, Throughout his life, filling his shoes when he fell ill in 2006, Raúl meticulously planned his own succession, establishing a two-five-year term limit for high office, and promoting Díaz-Canel as president in a Cuba without Castro at the helm for the first time in 60 years.

But, in the 12 months since he left the political front line, Raúl Castro has remained a pivotal figure in Cuba and cannot be fully considered a retired ex-president despite the fact that he will be 91 in June.

In the aftermath of the massive demonstrations of July 11, 2021, he attends the emergency meeting organized by the Political Bureau of the CCP to analyze what is happening and, five days later, dressed in his army general’s uniform, he participates to “an act of reaffirmation” with Díaz-Canel and the main political actors of the island.

During his last public appearance at the May Day parade a little over a week ago, Raúl showed himself to be very concerned about the sustainability of the fundamentals of socialism and above all aware of the “work undertaken by the new generations at the head party “. starting with President Miguel Díaz-Canel, his personal choice to guarantee the continuity of the Cuban political system. “He works very well and very hard; sometimes more than necessary,” he said.

After half a century of managing the engine room of the revolution and ensuring its logistics, and another 10 years at the head of the country and the CCP following the decline of Fidel, Raúl Castro is very likely undertaking his last great mission and his greatest challenge to date: the survival of socialism in Cuba beyond that of its founders.

Raúl is apparently still in good health; the army general office is still active, and Castro stays informed of the most relevant CCP and government meetings, invariably offering his opinion. And these opinions obviously carry weight and reassure the veterans who worked alongside him, who stress that “no one would dream of not consulting him on key issues”.

Certainly, what has happened in Cuba since 1959 cannot be understood without the figure of Raúl, perhaps the last great survivor of the Cold War and of the international politics of the second half of the 20th century. If Fidel was the founder, the charisma and the motor of the revolution, Raúl was its main guarantor and supporter, both head of the army and an active participant in the daily political life of the Communist Party. According to former CIA analyst Brian Latell, author of the famous biography After Fidel: The Inside Story of the Castro Regime and Cuba’s Next Leader, Raúl Castro was the only “really indispensable leader of the regime”, without whom Fidel could not have remained in power for decades; it was Raúl who kept things oiled up beyond his brother’s wishes and dreams.

Another intelligence analyst, Nikolai Leonov, of the disbanded Soviet intelligence service, the KGB, recalls that Raúl handled strategic relations with the former Soviet Union for 30 years, and was in the crosshairs during the island’s most delicate episodes, such as when a drug-trafficking trial against General Arnaldo Ochoa and other top military commanders rocked the pillars of the state in 1989.

During the crisis of the special period, when the country was struggling economically and famine was at its doorstep, Raúl personally convinced the party of the need to reopen agricultural markets to the law of supply and demand in as Minister of the Armed Forces (1959-2008), a concession to capitalism and a reform that hardliners view with suspicion. “Beans are more important than cannons,” Raúl said, thus closing the debate.

Like Fidel, Raúl was educated by the Jesuits and, like his brother, he fought for his political ideals at the University of Havana. In fact, Raúl was present at all the milestones of the revolution: the assault on the Moncada barracks (1953), the landing of the Grandmother yacht (1956), in the struggle of the Sierra Maestra (1956-1958), and also – as military leader of the eastern region of the country – in the Bay of Pigs invasion (1961) and the missile crisis (1962). When the dismantling of the Soviet Union plunged the country into recession in the 1990s, Raúl decided that the way to get it back on its feet was to develop the private sector. He had previously experimented with some success with the so-called “entrepreneurial self-management system” in the military enterprises under his command, a formula which gave more incentives to workers and more autonomy to managers seeking a greater economic efficiency.

“If in all circumstances Fidel was the commander-in-chief, Raúl always remained the chief of his staff,” Leonov concluded in his profile of the young Castro, a personal friend since 1953, of whom Leonov pointed out one of the main qualities. as its “pragmatic approach to governance”.

When it was his turn to take the reins in 2008 after the resignation of his brother, Raúl continued his policies aimed at triggering economic change and launched an initiative to end what he described as “absurd bans” and “undue gratuities”. Thanks to this latest decision, Cubans were finally able to stay in the same hotels as foreign tourists, buy computers, own cell phones and sell their homes and cars. Gradually, more and more people began to use the Internet and the humiliating “white card”, or exit permit, which was compulsory for any Cuban wishing to travel, was abandoned. The new president also began dismantling the whole apparatus of subsidies, bloated labor and economic support for unprofitable businesses that had underpinned Fidel’s dream of an egalitarian society for decades.

Unlike Fidel, who allowed self-employment during the crisis of the 1990s but considered it a “necessary evil” that he stifled when he could, Raúl promoted it. In 2008, there were approximately 150,000 self-employed people in Cuba; today there are more than 600,000 – 13% of the active population – while there are approximately 3,000 small and medium-sized private enterprises on the island.

But, according to prestigious Cuban economists, the changes brought about by Raúl, although important, were insufficient and too slow, adhering to the Raulist motto of working “without haste but without pause”.

Aware that his brother’s charisma and his way of exercising power were inimitable, Raúl designated the Communist Party as “the only worthy heir of Fidel”, as soon as he arrived at the Palace of the Revolution, and favored collective decision-making, ending the personal policy. and rely instead on the strengths of the country’s institutions. Raúl also spent considerable time early in his tenure at the helm “forging consensus” and restoring the lost primary role of the Councils of State and ministers, unlike Fidel’s modus operandi which often involved decision-making. important in his office to the presence of a small group of collaborators.

During his 10 years as president between 2008 and 2018, nothing substantial changed politically: Cuba remained a one-party country, controlled by the state and subject to a system of central planning, with no room for dissent. Economic reforms brought about change, but with ups and downs, and on more than one occasion Raúl himself railed against the “old mentality” ingrained in the darkest recesses of the civil service, demanding stopping the obstacles frustrating the cogs of change and “unblocking the productive forces.

Either he couldn’t or he didn’t want to succeed. But the truth is that Raúl paved the way for economic change, even if he also defined its limits before leaving his post as General Secretary of the CCP after delivering his last speech at its VIII Congress in April 2021. The number of private work initiatives that Cubans could undertake had just been significantly increased and the law on SMEs was about to be approved, but there were also demands from various platforms for the private practice of professions such as architecture and law, and the end of the state monopoly on foreign trade.

Raúl was adamant; he said that this path would soon begin “a process of privatization that would sweep away the foundations and essence of the socialist society that had been built over more than six decades”. And he left to his successors the following message: “These are questions that should not be subject to confusion and even less to naivety on the part of leading cadres and party members. There are limits that we cannot exceed because the consequences would be irreversible and would lead to strategic errors and to the very destruction of socialism and, consequently, of national sovereignty and independence. It was a message that threw cold water on the hopes of these sectors eager to see in-depth reforms.

A key moment of Raúl’s presidency was the normalization of relations between Cuba and the United States, which he negotiated with Barack Obama, a decision unthinkable under Fidel. In 2016, during a symbolic visit, Raúl received the former American president on the island. But then Donald Trump came to the White House and all the winnings were undone. Undoubtedly, settling the long-standing dispute between the two countries would have been an important legacy for Raúl’s successors. But it was not to be.

Before leaving the presidency, Raúl established a limit of two five-year terms for high office, which in Díaz-Canel’s case will be 2029 as president and 2031 as general secretary of the CCP. By then, we might have an idea if Raúl’s mission – and his latest mission – to keep Cuban socialism alive can succeed.

2022-05-09
Previous Post: US veterans give a message to young people who want socialism
Next Post: Monthly review | Taking the measure of neoliberal capitalism (the populist register reviews the “socialist register 2022”)