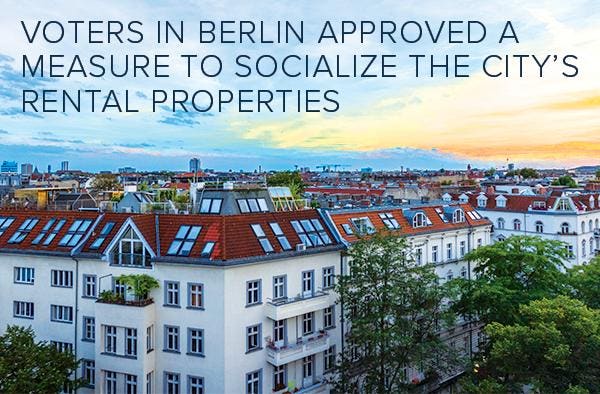 Does socialism threaten the German economy?

The Berlin Wall fell 32 years ago in November, ushering in a new era of freedom and opportunity. But judging by the results of a recent local election, it looks like socialism is trying to organize some sort of comeback in the German capital.

In a referendum that coincided with Sunday’s general election in Germany, a majority of Berliners approved a measure to forcibly seize apartments from owners. The move would socialize nearly a quarter of a million apartments, costing the city between $ 34 billion and $ 46 billion.

Supporters of the referendum think it will help control rent increases, but they are forgetting a couple of things. First, the cost of living is rising not necessarily because of greedy homeowners, but because new housing construction has not kept pace with growing demand. Evicting the owners does nothing to address this persistent problem.

And second, inflation is hitting every industry right now, not just rental real estate. Germany’s annual inflation rate hit its highest level for 13 years in August (one of the reasons many citizens stocked up on gold). So why stop at the apartments? Why not socialize the food? Clothes? automobile?

Very quickly, Berliners could find themselves behind the Iron Curtain.

Socialist-minded lawmakers and politicians around the world have celebrated the passing of the referendum. In a tweet, Canadian MP Don Davies called the measure “a creative and daring way to provide affordable housing.”

Granted, ours would be a perfect world if everyone had a comfortable place to live without rent. But as Margaret Thatcher said, “The problem with socialism is that you eventually run out of money for other people.”

It’s not just Berlin. Germany as a whole is set to turn left after the country’s Social Democratic Party (SPD) narrowly won the largest share of the vote on Sunday, with Finance Minister and former Hamburg mayor Olaf Scholz set to succeed Angela Merkel as chancellor.

I predict that Merkel will be remembered, in Germany and elsewhere, for many decades to come. After 16 years as Chancellor, she leaves office with a higher approval rating than any other world leader.

Like Margaret Thatcher, she curbed government spending, controlled bureaucracy, and oversaw a period of strong economic growth. A former researcher, Merkel has skillfully traversed Germany through a number of crises, including the 2007-2008 recession, helping to crystallize her country’s role not only as Europe’s largest economy, but also as its de facto leader. Under his leadership, Germany’s per capita GDP growth exceeded that of all other G7 countries.

But now is the time to look beyond Merkel, and if I’m honest, the socialist referendum in Berlin makes me a little uncomfortable.

I don’t know anything about Olaf Scholz, the presumed chancellor on hold, other than that he is a member of the SPD, a party that has its roots in Marxism. Among his campaign pledges is increasing the number of housing units – which I think will do more to suppress rent increases than the socialization of rental property ever could – develop renewable energy and raise wages. minimum.

Can we reverse the course?

Germany’s flirtation with socialism is part of a disturbing trend hitting the world’s largest economies, from Justin Trudeau in Canada to Alexandria “Tax the Rich” Ocasio-Cortez in the United States

Although the People’s Republic of China has always been a socialist, President Xi Jinping has recently attacked Western-style capitalism in an attempt to revive Chairman Mao’s Marxist vision. According to a Wall Street Journal article, Xi seeks to build a China “in which the party does more to direct the flow of money, sets tighter parameters for entrepreneurs and investors … and exercises even more control over it. economy than today â€.

Like Berliners who seem to have forgotten the struggles experienced under the Soviet regime, President Xi seems to have forgotten that it was Deng Xiaoping’s decision in 1978 to liberate parts of the Chinese economy that helped the country to know the one of the fastest growing the world has ever seen.

Announcement! I will be in Dubai on October 12 for the AIM summit. If you’re in the area, be sure to follow my panel on Bitcoin mining with sustainable energy: www.aimsummit.com.

Disclosure: All opinions expressed and data provided are subject to change without notice. Some of these opinions may not be suitable for all investors. By clicking on the link (s) above, you will be redirected to one or more third party websites. US Global Investors does not endorse all of the information provided by this site (s) and is not responsible for its / their content.

2021-09-30
Previous Post: What exactly is capitalism and how does it affect you?
Next Post: ‘Big government socialism’ is at the heart of Biden’s agenda, says Pence