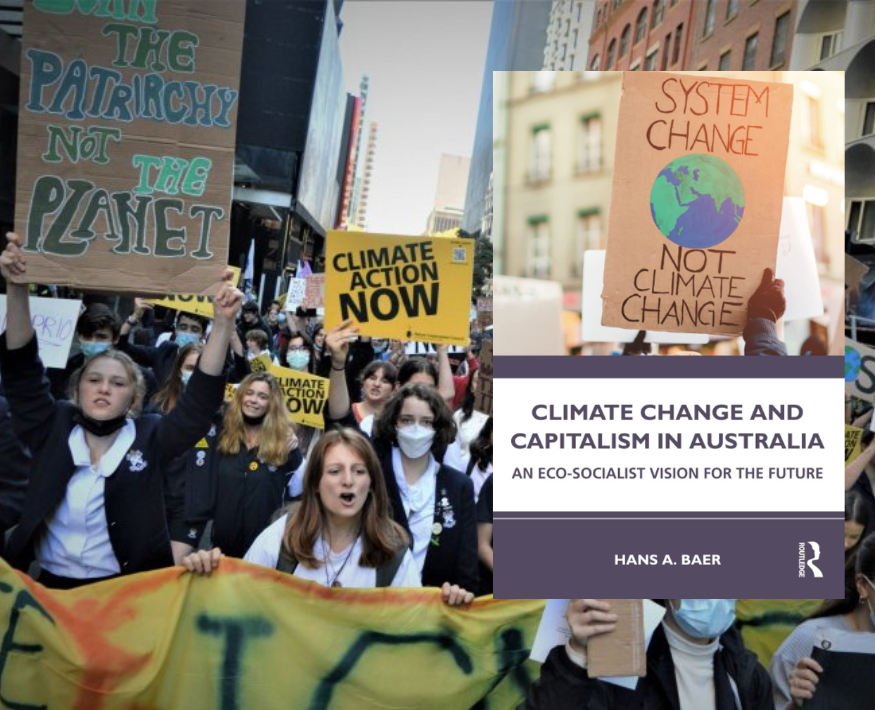 Climate Change and Capitalism in Australia: An Eco-Socialist Vision of the Future
From Hans A Baer
Routledge Press, London, 2022
xi+240 pp., $35.96 per person

Anthropologist Hans A Baer is a well-established writer on global warming and capitalism. In his latest book, Climate Change and Capitalism in Australia – An Eco-Socialist Vision for the Future, Baer not only tells us about the environmental pathologies of capitalism, he also invites readers to imagine a future beyond the system that has caused global ecological misery: capitalism. Much of this draws on his 2018 book, Democratic Ecosocialism as a True Utopia: Transition to an Alternative World System.

Baer’s book is divided into seven parts beginning with the impact of global warming in Australia. Next is “Australian Capitalism as a Driver of Climate Change”. Chapter three examines politics and global warming while chapter four deals with environmental movements. Chapters five and six examine climate justice activism and ecosocialism. The final chapter sheds light on the issue of ecosocialism in a global context.

The book begins with a clarifying statement: “Solving the climate crisis and related crises requires a radical socio-ecological revolution that transcends capitalism and replaces it with an alternative system based on social justice, deep democracy, environmental sustainability and a safe climate, both worldwide and in specific countries, such as Australia.” Today, many have come to terms with the fact that “global capitalism has had adverse effects on large swaths of humanity and on a fragile ecosystem”.

Australia’s fragile ecosystem has been seriously threatened in recent years. For example, the hottest year in Australia was 2019. Worldwide, 20 of the 21 hottest years occurred on the 21st century. Worse still, in late 2019 and early 2020 Australia experienced the most devastating bushfires on record. About 80% of all Australians have been affected. In an almost classic calamity, the country’s neoliberal Prime Minister Scott Morrison embarked on a secret vacation to Hawaii during the bushfires until he was discovered.

For Baer, ​​any socialist alternative must embody inspiring ideals. It must also propose concrete proposals to deal with the problems of contemporary capitalism. With this, Baer’s concept of democratic eco-socialism is not far from what, for example, Michael Albert suggests in his book no bosses.

One of the reasons Baer comes to his conclusion about the suppression of the current economic and political system is found in the writings of Noam Chomsky. Chomsky once noted that the United States is run by a one-party system. Chomsky calls it the Business Party. This party, however, has two factions: the Republicans and the Democrats.

In Australia, we find something very similar, where there is also a Business Party. Its two factions are the Coalition and the Australian Labor Party. Beyond this and largely excluded from influencing environmental laws are, what Baer calls, the three climate movements in Australia: (i) mainstream, eg the Climate Council; (ii) environmental NGOs such as, for example, Greenpeace; and (iii) grassroots and action groups such as Rising Tide, Lock the Gate, Stop Adani, School Strike 4 Climate and Extinction Rebellion.

The author proposes moving from the environmental pathologies of contemporary capitalism – more “Capitolocene” than “Anthropocene” – towards a democratic eco-socialism. This suggestion is based on his decades of research on global warming and the belief that Wallace-Wells wasn’t too off the mark when he wrote about, The Uninhabitable Earth.

Beyond that, Baer argues that global warming has “three interrelated dimensions”: there is an undeniable link between global warming and capitalism; second, there is the Jevons paradox, which states that “technological improvements in energy efficiency do not lead to a reduction but to an increased use of natural resources, and thus contribute to environmental degradation”; finally, capitalism means the destruction of carbon sinks. A carbon sink is pretty much anything that absorbs more carbon from the atmosphere than it releases.

A precursor to what is to come in the coming decades can be seen in the recent impact of global warming in Australia. Recently, Australia suffered a so-called “millennium drought” between 1997 and 2009. In 2003 alone, it destroyed almost two million hectares of nature. This was followed by Victorian Bushfires (2009). It was the most devastating bushfire on record in Australian history. Of course, this all continued with the so-called Angry Summer (2012‒13) which included “the hottest day, week, month and year”.

The situation worsened with the mega bushfires of 2019-2020.

Morrison remains a strong supporter of Australia’s powerful coal industry. This could well mean that Australia is a client state of the internationally capital-led coal industry. Most of Australia’s resource industry is foreign-owned. This has resulted in four common characteristics, namely: (i) extremely high levels of foreign companies operating in Australia; (ii) a significant inflow and outflow of capital; (iii) a strong import-export orientation in which Australia exports raw materials and imports consumer goods leading to the piling up of empty containers, for example in Sydney’s Botany Bay; and finally (iv) a resulting dependence on imports of industrial equipment.

For ordinary Australians, this means that “taxes and royalties paid by all mining companies at all levels of government represent less than 5% of government revenue”. Interestingly, the Queensland government earns more from speeding fines and car registration than from the coal industry. Qld is one of the major mining states in Australia. In other words, foreign capital pays virtually no tax while Australians foot the bill. This is the beauty of neoliberal capitalism and politics.

Of course, to keep the show going, capitalism needs two things: firstly, it needs the best politicians money can buy and indeed one of the two business parties in Australia gets 2, 6 times more money than the other. Second, you need a propaganda machine telling Australians how wonderful it all is. This is the job of Rupert Murdoch’s formidable media machine. Murdoch’s media operates with media concentration second only to North Korea.

Following years of neoliberal rule, Australia has a failing infrastructure and transport policy. Perhaps it is better to say that he has no politics at all, because the neoliberal belief system demands reliance on the free market. As a result, “85% of transport emissions come from road transport and more than 60% from automobiles and light commercial vehicles”. Sydney, for example, is an automotive city. Sydney has no metro comparable to London, Paris, New York, Berlin, Tokyo, etc.

To make matters worse, “Globally, Australia stands out in that it was the only country to adopt and then abandon some form of carbon pricing” when the Labor Party introduced it in 2012. and that the Australian Liberal Party eliminated it in 2014. The latter party also pushed strongly against the Kyoto Protocol. Eventually, Labor Prime Minister Kevin Rudd ratified the Kyoto Protocol in 2007 much to the displeasure of the Conservatives.

Murdoch’s most ideological flagship is The Australian newspaper. Not surprisingly, an analysis of 880 articles between January 2004 and April 2011 found that some 700 of them opposed climate action. A good example of how propaganda works remains the visit of global warming denier Lord Monkton to Australia at a time when NASA global warming expert James Hansen also visited. Not only did the Australian right-wing press give Monkton a very favorable platform, Hansen remained largely ignored. In short, “not only do mining companies have the government…wrapped around their finger, but so does the conservative Australian media”.

After sketching the political program of democratic ecosocialism, Baer closes his book by paraphrasing Rosa Luxemburg. “Eco-socialism or eco-dystopia” dates back to the 1916 Luxemburg essay”Sozialismus or Barbarei » (“Socialism or barbarism”).

Today, we again face a stark choice between global ecocide and Baer’s democratic eco-socialism. It’s up to us to choose.

[Abridged from Marx and Philosophy.]

2022-06-10
Previous Post: Will Republican senators vote for the end of capitalism as we know it? | Opinion
Next Post: Capitalism and Formula – Workers World