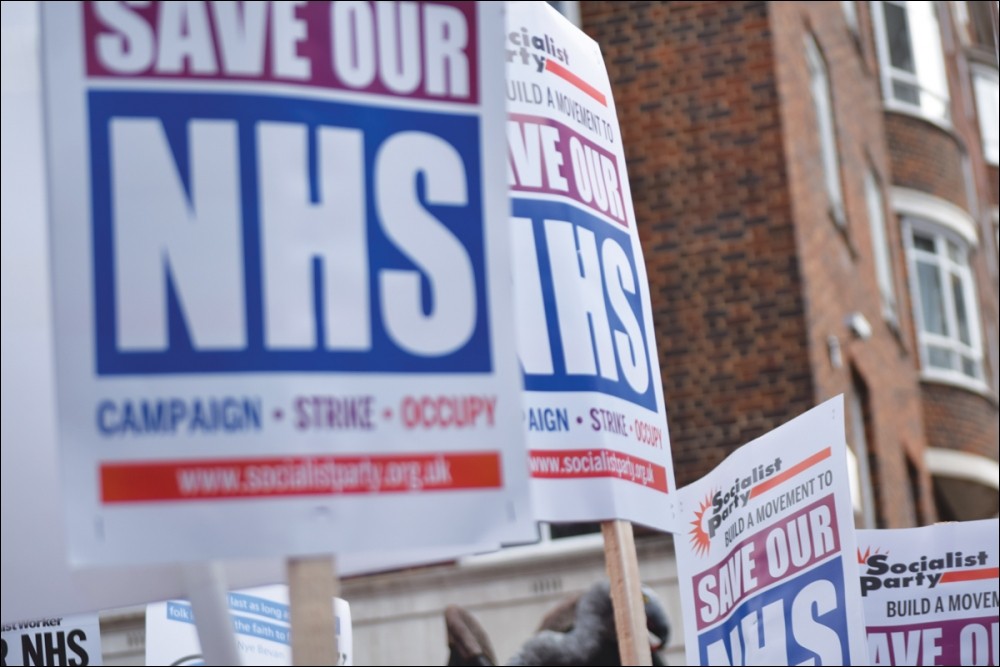 Save our NHS, photo Mary Finch (Click to enlarge)

Under the colossal weight of the global pandemic, health services on all continents and in virtually all countries have struggled to contain the growing number of victims of Covid. However, it is not only the poorest countries that have been at fault. The richest and strongest capitalist society and economy on the planet, the United States, has used the crisis to line the pockets of big business, but has completely failed the American people.

In an article by the Financial Times, the body of big business, an article by a practicing surgeon in San Francisco highlights the spiraling hospital costs “like the real health care scandal in the United States.” As is known, the United States under Trump at one point had the highest death rate from Covid. He writes: â€œThe parallels between the skyscrapers of downtown Manhattan’s banks and the behemoths of today’s hospitals are striking: gleaming glass windows, expansive marble lobbies, and costly manicured greenery, with skyrocketing executive bonuses and global brand recognition to boot.

â€œLikewise, they have both been large-scale recipients of federal support. As hospitals battled Covid-19 last summer, the nation’s largest and wealthiest health networks have absorbed billions of dollars in stimulus. The image is reminiscent of Wall Street in 2008: Much of America’s health care industry has grown too large to be cured. “

Over the past 20 years, the price of US hospital services has increased by over 200% against an average inflation of 60%! Yet large hospital networks, which contribute three times as much as drug prices to total U.S. health care spending, have largely remained out of public scrutiny.

One consequence has been that unpaid medical bills totaled around $ 140 billion last year. The author comments: “Continued rise in health care prices threatens to plunge more patients into financial despair.” Indeed, books, pamphlets and articles like this serve to warn us of what can happen in Britain if the rotten Conservative government pushes for even more privatization of health care services.

A recent book, ‘Deaths of Despair’ by two economists, Angus Deaton and Anne Case, exposes the horror of the failing US healthcare system and what lies in store for UK workers if they allow massive privatization of the NHS at an accelerated pace .

It is no coincidence that some private sector spokespersons refer to themselves as “health care providers” – most of the time they represent sections of the private health sector, much of which is publicly funded, and attacks the NHS. Nye Bevan faced a similar conflict as Health Secretary when the 1945 Labor government created the NHS. He could only do so, in his words, appeasing the private sector, including doctors, by “stuffing his mouth with gold.”

Various governments – Conservative and Labor – have sought to extend this principle by offering ever more possibilities for privatization. Where it could lead is explained in “Deaths of Despair”: “Given the high costs, we can expect Americans to have superior health outcomes. the worst among rich countries, which has been true for a long time, long before the recent epidemic of death and declining life expectancy “.

This led the authors to conclude that the American healthcare system is “a good example of Robin Hood’s reverse redistribution, what we have called the Sheriff of Nottingham redistribution.” And why is this happening? They respond: “Hospitals that were once run by doctors are now run by business executives – some are doctors who have changed their white coats for business suits – who receive CEO salaries to build empires.” and raise prices. “

Yet despite the mountain of facts, figures and real examples of capitalist failure, the authors still ardently defend capitalism: â€œThe economy doesn’t need to be run this way. Capitalism does not need to be abolished, but it must be controlled and in the public interest, not just in the interest of shareholders or profitable companies â€. They absolutely do not understand that capitalism is a system whose sole purpose is to produce a surplus, that is, profit, arising from the exploitation of the labor of the working class.

What the authors of “Deaths of Despair” oppose is not the capitalists themselves who are reaping the surplus, but what they – and before them Adam Smith, the great bourgeois economist – call “the search for annuity â€. This represents the parasitic layer stealing from the poor on behalf of the rich and playing no role in the development of industry and society, but simply seeking to amass wealth. They are “illegitimate” for these capitalist theorists.

They ignore and ignore the laws of capitalism itself, as analyzed by Karl Marx, which remain very relevant in explaining the current crisis, including the global health catastrophe. There could be no greater demonstration of the correctness of Marx’s analysis than the devastating economic recessions and the major and minor recessions of recent times. We have fully analyzed these ideas in our recent publication â€œThe Struggle for World Socialismâ€, which emphasizes the need for socialist planning on a world scale.

The authors show that life expectancy in the United States in 2018 has declined for three consecutive years. “In 2018, an additional 158,000 Americans died from preventable ‘deaths of desperation’ – the equivalent of three 737 Max jets falling from the sky every day with no survivors!”

These overwhelming numbers, and many more, are a terrible accusation against American capitalism, although the authors themselves surprisingly defend this system, with their unwavering faith in the private enterprise that criminally fails the American people.

Yet they readily concede that the areas of greatest dependence leading to early death are linked to economic and social conditions. The risk of dying from suicide in midlife, accidental drug overdose, or alcoholic liver disease was a third higher in poor states like Kentucky in 2017 than the national average. Other â€œleft behindâ€ states have also experienced the greatest economic decline due to deindustrialization – itself a failure of American capitalism.

Moreover, it is the poor and the less educated who have borne the brunt of the catastrophic loss of well-paying jobs, as the authors demonstrate. The extent to which drug addiction has taken hold in the United States is illustrated by the fact that “a third of all adults, 98 million people, were prescribed opioids in 2015”. In addition, â€œcolossal sums of legal opioids are generated by America’s healthcare system, by far the most expensive in the world … [which] does not prevent the decline in life expectancy but actually contributes to its fall “.

The failures of capitalism

The authors make an astonishing admission: “The United States is different from other rich countries in that it has several million extremely poor people, who arguably have as bad living conditions as the poor in Africa and Asia” ! This leads the authors to ask the question: “Why does capitalism fail so much?”

Yet their conclusions are as astonishing as they are contradictory. They conclude: â€œWe are not against capitalism. We believe in the power of competition and free markets. However, the description of the collapse of the health care system in the United States strongly refutes their arguments.

The only realistic conclusion to be drawn from these exhibitions is that the system of capitalism has had its day. Patchwork solutions are no longer capable of restoring neither capitalism itself nor the peoples of the world to health, including economic health.

This would only be possible through the socialist reorganization of society on a national and international scale. This in turn will inevitably raise the question of bringing together the workers of the world in a democratic socialist confederation. So the idea of â€‹â€‹profiting from suffering and ill health will be a bad dream of the past!

2021-09-15
Previous Post: Here is a political movement which looks like trouble for climate action and not it is not only the anti vaxxers
Next Post: Reviews | Socialism beats capitalism in the time of the coronavirus