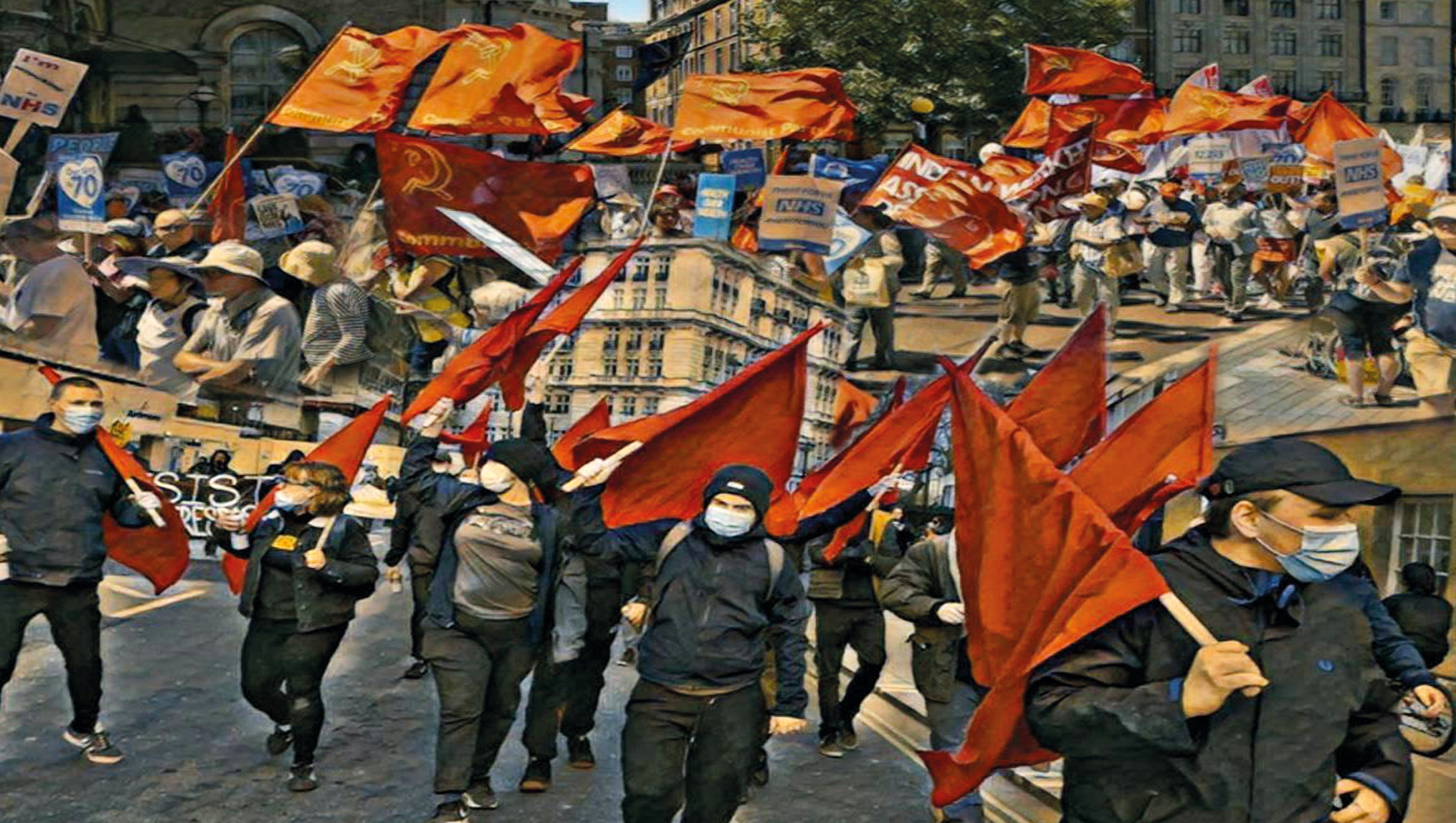 The CET Fall Congress will analyze the national and international situation since the previous one in 2017; define the strategic and tactical objectives of the party for the coming period; and elect a new executive committee to direct its work accordingly.

The outgoing PC executive has now published its resolutions for debate until and during the 56th Congress. The national resolution begins with an assessment of the game-changing 2019 general election.

The main causes of Labor’s defeat were, first, the disastrous change in party policy, from respecting the outcome of the European referendum to obstructing Brexit and proposing a second referendum; and second, the slanderous assassination of Jeremy Corbyn by the ruling class, aided and abetted by a significant part of the Parliamentary Labor Party.

The result was the election of a central government that put the interests of big business well above those of workers, their families and the general public when the Covid crisis hit. Moreover, the pandemic itself has confirmed that Britain’s economic and political system was designed to meet the needs of monopoly societies, not the people.

The Conservative government’s refusal to stop international travel and put in place a lockdown early enough; transferring elderly patients from the NHS to nursing homes without testing or staff with PPE; the premature relaxation of protective measures against Covid; the refusal to work with unions and enforce an adequate workplace safety regime – all of this has helped propel Britain to the top of the global Covid mortality table.

But there is also a deeper explanation. As the Congress resolution says: “A decade of deep austerity cuts and privatizations has fatally weakened the ability of the NHS, elderly care and civilian emergency services to protect lives despite the heroic efforts of staff. and other frontline and key workers.

What a contrast to the drastic and decisive measures taken in China, Cuba and Vietnam where the state, workers and the people in general have mobilized to push back the pandemic.

Safeguarding corporate profits was and remains the government’s top priority. In the end, however, this criminal negligence not only claimed the lives of 152,000. It also costs the Treasury £ 407 billion, much of it in grants to large corporations.

Once again, public funds were used to bail out capitalism in Britain, this time on an even larger scale than turned out to be the case after the 2008 financial crash.

Who will foot the bill is a question we already know the answer to. This year’s spring budget announced the first round of cuts in public spending – with the military exempt – and tax increases in real terms.

Other government policies, including authoritarian measures to strengthen the powers of the police, courts and intelligence services and to curb public protests, signal a new ruling class offensive against the living standard of the working class. and democratic rights. The first signs of this offensive can be seen in the wave of “shoot and rehire” attacks on jobs and wages by large private sector companies.

Neoliberal economic policies do not deviate from “state monopoly capitalism”. State power at the British level is being used ruthlessly to advance the interests of monopoly capital more than ever. This means, among other things, that all forms of bribery and corruption experienced under pre-Brexit Conservative and Labor governments are flourishing under Boris Johnson.

Johnson’s Conservative regime intends to reshape Britain, using populist rhetoric and deceptive slogans – Build Back Better and Leveling Up – to maintain its support for a more centralized ‘free market’ Britain in which the capitalist monopolies (in particular “Big Pharma”) are free to profit at will. In the battle of ideas, British nationalism and militarism are deployed to rally people to the flag against challenges to Conservative rule at home and British imperialism abroad.

The Home Market Act cancels the powers of the Scottish and Welsh Parliaments to administer regional development funds and monitor state aid to industry.

Such a blatant attack on the devolution regulation highlights the case of what the Communist Party calls “progressive federalism” (also known as “radical federalism” in some left-wing Labor circles).

Communists defend the right of the Scottish and Welsh peoples to independence and the mandate of the majority SNP-Greens in Edinburgh to hold a second referendum. But rather than pursuing a false model of independence whereby Scotland is subject to the Bank of England, the Treasury, the EU and NATO, we are calling for maximum economic power in a Great Britain. Federal Brittany.

A federal chamber, an English parliament and regional assemblies elected by a true system of proportional representation would consolidate a new constitutional settlement, preserving greater powers for Wales and Scotland and aiding the growth of progressive English patriotism .

Labor and progressive movements must stand united in the struggle to challenge the power of capitalist monopolies and to seize and redistribute the vast wealth concentrated in the City of London and British tax havens abroad.

What the objective conditions now demand is a return to class politics and unity to build an anti-monopoly alliance against British state monopoly capitalism.

Hence the focus of the congressional resolution on how big business, corporations, state, and monopolized media are blocking the road to progress on all fronts. Economically, they are resisting the policies needed to tackle the chronic weaknesses of the unbalanced UK economy.

They do this by underinvesting in industry, infrastructure and technology – except in the state-subsidized arms sector – and in education and training; the predominance of the City of London’s financial institutions and markets and the over-reliance on financial and real estate services and income from overseas investments; lack of central planning and controls; the refusal to tax the super-rich and big companies to finance public services; and the use of household and corporate debt to maintain demand in the economy.

On the environmental front, the inability to plan and invest much more in low-carbon transport and non-nuclear renewables is undermining Britain’s contribution to the fight against global warming.

Socially, the use of for-profit construction companies and landowners to build the millions of houses needed has clearly failed; instead, we have real estate speculation, escalating prices, the spread of second homes for the rich and the return of slums.

No successful mass movement can be built without the broad participation of women. But many are trapped in precarious, poorly paid jobs and poverty, burdened with unfairly heavy burdens of household chores and family care.

But instead of receiving remedies based on labor rights, public services and social benefits, women must now take rearguard action to defend recent gains against reactionary forms of identity politics. gender.

Our position is clear: “The Communist Party recognizes no antagonistic contradiction between the class struggle against the oppression and overexploitation of women and the campaign to end discrimination against transgender people.

Meaningful dialogue and debate will help advance the legitimate interests of women and trans people, not the division and disunity within labor, women’s and LGBT + movements.

The ruling class has another weapon in its arsenal against the prospect of unity in an anti-monopoly alliance, namely racism. Employers large and small continue to profit from the overexploitation of black, immigrant and undocumented workers.

Racism is rooted in capitalist exploitation and imperialism. The participation of anti-racist activists in a larger alliance targeting capitalist monopolies can only be to the mutual benefit of all the forces involved.

Young people face more and more significant education, employment and housing problems than in a generation or two. The Youth Charter of the Communist Youth League offers a way forward and every movement needs the energy, skill, daring and ingenuity of those who will inherit our society.

As the congress resolution points out, “Building such an alliance through discussion, debate and action must now be the top strategic priority of the Labor and Progressive movements and the left, including the Communist Party. “

The People’s Assembly looks like a budding anti-monopoly alliance. But it must be an alliance built in campaigning at all levels, in workplaces and local communities as well as in national protests. And it must not only oppose cuts and privatization, it must offer a positive alternative.

This is why the Communist Party is proposing a left program of the main demands that challenge state monopoly capitalism. These include:

An anti-monopoly convention could consolidate such a program as the basis of a mass movement, laying the groundwork for replacing the current government in London with a left-wing government.

There will be controversy around these perspectives.

They refute the escape from modern monetary theory and a universal basic income. They abandon the superficial “anti-Toryism” peddled by the self-proclaimed “center-left” and part of the extreme left. They defend the unity of the working class against national separatism.

In short, the resolution rejects idealism and makes a concrete class analysis of the concrete situation, followed by concrete proposals that point the way to socialism.

The main CP Congress resolutions can be found at: www.communistparty.org.uk/56th-congress.

By: Rhonda T. Mills Category: Socialism
« Just like after the 2008 crash, capitalism needs a reboot » Stand up against a rigged and rotten system