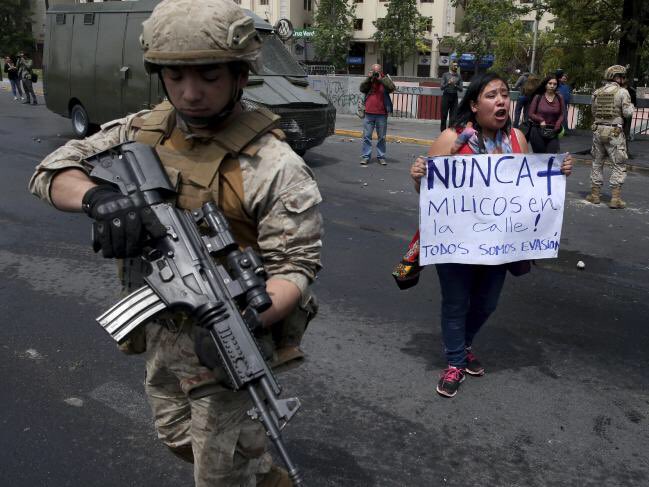 Countless symbols of neoliberalism were attacked during protests in Chile over the long weekend of October 18-20.

A skyscraperuh housing the headquarters of a European electricity company, profiting from the production of electricity in Chile, was set on fire.

Protesters also took giant televisions from looters and used them for bonfires.

There was an attempt to set fire to the greatest catholic cRoss in South America, which houses a museum dedicated to Pope John Paul II, who legitimized dictator Augusto Pinochet during his visit to Chile in 1987.

The Valparaiso Headquarter of El Mercurio The newspaper, funded by the Nixon-Kissinger administration to pave the way for the 1973 coup, was torched, along with other sites and icons of power and neoliberalism.

These events, which are unfolding at the time of writing, in all of Chile’s major cities, are producing upheaval, chaos, state repression and societal collapse, in a place of great significance for the Latin America and the world.

The weekend of October 18-20, and perhaps the entire month, will create a historic divide in the memory of Chile, Latin America and beyond.

Chile, the first country where neoliberalism was fully applied from 1975 by Pinochet, under the guidance of economists Milton Friedman and Friedrich Hayek, has become the model and the way for much of the world.

The ruptures that followed Chile’s neoliberal shock therapy included: the conservative revolutions of former US President Ronald Reagan and former UK Prime Minister Margaret Thatcher; China’s development role as the world’s sweatshop; the dismantling by the Australian Labor Party of the legacy of social rights of former Prime Minister Gough Whitlam and the rise of the Russian oligarchy.

Neoliberalism, that extreme form of capitalism that has replaced the so-called “welfare state”, aims to eliminate social rights, including education, health and transportation. It ignores national resources as part of the commons and makes inequality itself – or “the market” – the engine of a new economic, political and social structure.

October of this year will be historic for much of Latin America, with the recent uprising in Ecuador, which forced the duplicity of Lenín Moreno government to cancel or at least temporarily halt the application of a neoliberal fund package. international monetary policy.

In Brazil, former President Ignacio (Lula) da Silva could be released from prison.

there are forts panels that Mexico will have to decide urgently this month, whether it is a “terrorist narco-state”, a term given to it, not by the United States, but by the Zapatista National Liberation Army.

However, the Chilean October could be the most telling for the future of Latin America.

In the cradle of neoliberalism, 46 years after a civil-military dictatorship applied brutal coercion with extreme capitalism to reshape society, the current Chilean revolt may well show that the most entrenched system, in “the most entrenched society. individualistic, repressed and lobotomized from Latin America, ”as Noam Chomsky characterized him in the late 1990s, was ultimately challenged.

The day before the mass revolt, on October 17, the Financial Time, the London bible of world capitalism, published an interview with Chilean billionaire president Sebastian Piñera.

Piñera made his fortune bringing credit cards to Chile. He created an empire out of the former state-owned airline LAN Chile, a TV station, and many other businesses, including Chile’s most popular football club, Colo-Colo.

The FT presented Chile as “a beacon of stability and sound economic management in a continent which is not famous either”, and Piñera as a “lone” fighter against “populism”, the code word for any challenge to the status quo or neoliberalism.

Piñera told the FT: “Look at Latin America… Argentina and Paraguay are in recession, Mexico and Brazil in stagnation, Peru and Ecuador in deep political crisis and in this context Chile looks like an oasis because we have a stable democracy, the economy is growing, we are creating jobs, improving wages and maintaining macroeconomic balance.

“It’s not easy,” Piñera added, perhaps alluding to concern about what was already bubbling beneath the surface.

Four days before this article appeared, daily acts of civil disobedience began after the government increased fares for the metropolitan metro – one of Chile’s last state-owned enterprises.

Rates have been increased by 30 pesos (3%), which in this extremely unequal country would have made economic survival even more difficult.

High school and college students ignited the protest movement, as they did during the popular explosions of 2006 and 2011, which took place during Chile’s “transitional democracy”. They asked metro customers to evade the fares by skipping the doors.

Piñera announced the removal of the tariff increase the next day, but the uprising continued. Piñera, members of Congress and the mainstream national and international media are struggling to explain why.

This is different from the Ecuadorian case, where following an uprising against the removal of fuel subsidies, President Lenin Moreno managed to stop the revolt and start negotiations.

Before targeting symbols of power, Chilean rebels targeted the underground transportation system, used by millions of commuters, instead of the unreliable aerial bus system privatized by the dictatorship.

The metro was one of the few areas untouched by Pinochet’s neoliberalism.

The other was copper mining, the “Chilean Wage”, nationalized by former President Salvador Allende in 1971. However, the world’s largest copper mine, located in Chile, was owned by BHP based in Australia since the 1990s, and pays little tax.

Commuters have always paid more to use the metro, despite the crowds and lack of air conditioning. It’s reliable for commuting to work and crossing the capital Santiago, one of the most sprawling and segregated cities in the world.

The metro has been presented as a model of “urbanity” and “sophistication” by all dictatorial and post-dictatorial governments. The metro is a pride, worthy of the “developed” world, to which Chile desperately claims to belong, especially after being recently accepted into the OECD.

Young people, and then many commuters, began to view this symbol of “pride” as a meaningful public space in which to display civil disobedience.

The repressive police response to the protests was predictable, but the enclosed space of the underground metro made the incidents particularly explosive and destructive.

Chilean mainstream media have been outraged and intrigued by the “inexplicable” contradiction that people are destroying the only real public transport that remains.

On October 18, the young people came out of the ground and the multitudes joined them. In broad daylight, greater collective expression made fear disappear.

They now challenge the police and even the military in the streets. They no longer adhere to the current social contract in this “island” of Latin America, surrounded by the immense Cordillera of the Andes and the Pacific Ocean, an “oasis”, free from unstable and polarizing policies, a “model” of consumption. capitalism.

On October 18, Alameda Avenue, the main public space and nerve center of Santiago, became an open field beyond Allende’s words and dreams.

Uprisings are not new

The closest chronological precedent to the current riots was the looting that followed the 2010 earthquake and tsunami in southern Chile. The then president, Michelle Bachelet, after some reluctance, sent the army when the state failed to provide basic services and food.

The current crisis, which “nobody plannedAccording to coverage by one of Chile’s two monopolized print media, has a longer history than the country’s neoliberal-transitional democracy since 1990.

Some online alternative media have reminded readers of the chaucha revolution, when an increase in transport fares of 0.20 pesos (known as chaucha) resulted in street violence and repression.

However, we do not mention much the fact that this revolution also led to the end of the alliance between the middle and popular classes (the “popular front”), to the birth of a powerful left-wing trade unionism or to the first candidacy. of Salvador Allende as a Marxist in 1952. (Allende then ran for office four times until he was elected in 1970.)

The closest parallel to this revolt is the cycle of national protests and strikes from 1983 to 1986, which crippled the entire country once a month, shook the Pinochet government, and conquered undying fear after 10 years of dictatorship. .

On August 11 and 12, 1983, Pinochet sent 18,000 soldiers in the streets to suppress the demonstrators. This time, 9,500 soldiers were sent to patrol the streets of Santiago and major cities, according to official figures.

The curfew has produced more chaos, in a neoliberal society that demands that its citizen-employees continue to produce services, sell goods and work “flexible” hours.

There are more historical parallels, when the Minister of the Interior, in charge of security, is Andres Chadwick, fervent young collaborator of Pinochet. But this is where the parallels end.

[Part 2 of this series will appear in the next issue of Green Left Weekly.]