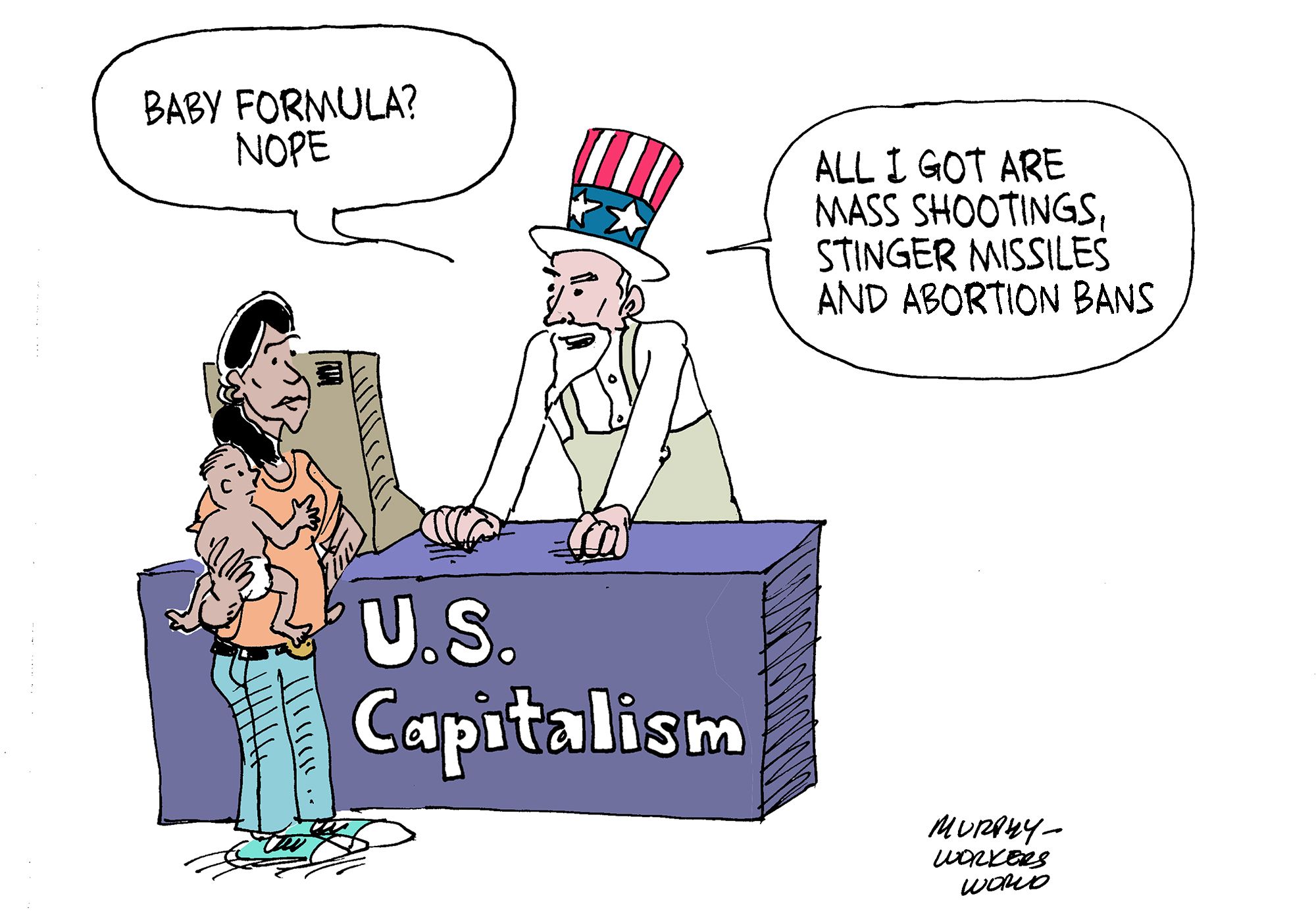 The following article was published on Black Agenda Report on May 29.

The shortage of infant formula is not a problem in the system. It actually illustrates all that is wrong when the profit motive reigns. Capitalism cannot ensure a food supply or anything else that humans need.

“Socialism doesn’t work” is repeated like a mantra. We are constantly told that capitalism provides jobs, housing, food and health care in this country, yet it does all of that very badly. The United States is said to be “the richest country in the world”, a bizarre statement that implies that people are prosperous even though they are not.

Gig work, housing insecurity, medical debt, and student loan debt are all common experiences for people in the United States. Now, to add insult to injury, the system says if superior can’t even feed little babies.

There is a historical shortage of infant formula. There are parts of the country where infant food simply cannot be found at any price. This headline is the most honest about the situation. “America is running out of baby formula because three companies control the market and babies aren’t so profitable.” (tinyurl.com/23sxtxhv)

There are only three infant formula manufacturers; and one of them, Abbott, had to close its factory after a whistleblower revealed that its product was contaminated. Two infant deaths could be linked to the contamination, which was not discovered despite regulatory authority from the Food and Drug Administration. (tinyurl.com/2p82s8e9)

The Biden administration has invoked the Defense Production Act to increase supply and now allows the import of formulas from foreign countries. They make a show of their belated response to a situation that should have been resolved sooner. But the palliatives to solve a temporary crisis should not ignore a more important problem.

Capitalism is the problem. Transportation Secretary and former presidential candidate Pete Buttigieg admitted as much, even as he tried to defend the bankrupt state. “But let’s be very clear. It is a capitalist country. The government does not manufacture infant formula and should not. Companies make formulas.

In a better society, a socialist society, infant formula would not be sold by private interests. It would be provided free to every family, and yes, the government would. “Market forces”, which we are told solve all problems, actually create very serious ones. In this country, even the effort to provide infant formula to all, regardless of income, is yet another means of sustaining monopoly capital.

The Women, Infants and Children (WIC) program offers exclusive contracts with only two companies in exchange for discounts. The handful of companies providing formulas are getting richer, but the market is not doing a good job of looking after the kids. The formula does not provide a large enough profit margin to interest companies. This market, which we are told to believe in with semi-religious fervor, does not provide for other needs very well either. Only public outcry from desperate parents got the response needed after months of shortages.

Even cynical politicians end up paying attention when babies’ lives are in danger, but this problem is not unique. Higher education should be free or at the very least inexpensive, as it was before neoliberalism turned the country into a failed state. Health care should also be free, but the only promise Biden has kept is to make sure that doesn’t happen. The very term “medical debt” is an abomination, yet it is the reason for most personal bankruptcies. It seems formula milk is the canary in the failing coal mine.

This time the crisis is about feeding babies, but there’s more to come. Food shortages and rising prices, gasoline prices and voracious hedge funds grabbing homes are all symptoms of a very big problem.

Of course, capitalism creates all these crises, but the levels of indoctrination are so high that very few people make the connections. While all fingers should be pointed at the market forces that create so much misery, some people prefer to shame non-breastfeeding women. Others are angry that babies in immigration detention are given the formula they are required by law to have.

Pete Buttigieg isn’t the only one interrupting any discussion of alternatives. The “socialism doesn’t work” trope is quite effective. Even as the quality of life declines in myriad ways, there is little improvement in the willingness to reject American exceptionalism and its many lies. The cognitive dissonance required to deal with these many difficulties is too great for many people to experience, even if their expectations for basics, such as a steady supply of infant formula, crumble around they.

This particular crisis will subside, but it will be followed by others. There is still $1.9 trillion in student debt incurred by people who just wanted to make their lives better. After allocating $30 billion for policing, Biden administration tells states and localities to use unspent COVID-19 stimulus funds for police, who apparently can’t get enough money audience. COVID-19 has not gone away, and no other health care needs need this funding either. Of course, the Ukrainian cash cow must be milked to the tune of another 40 billion dollars.

When the next calamity hits the fan, the real villain must be named. Regardless of other symptoms, it is capitalism that causes our problems.

2022-06-11
Previous Post: Democratic eco-socialism or climate catastrophe?
Next Post: Is debt threatening to ruin your retirement before it begins? 4 tips that can help | Personal finance