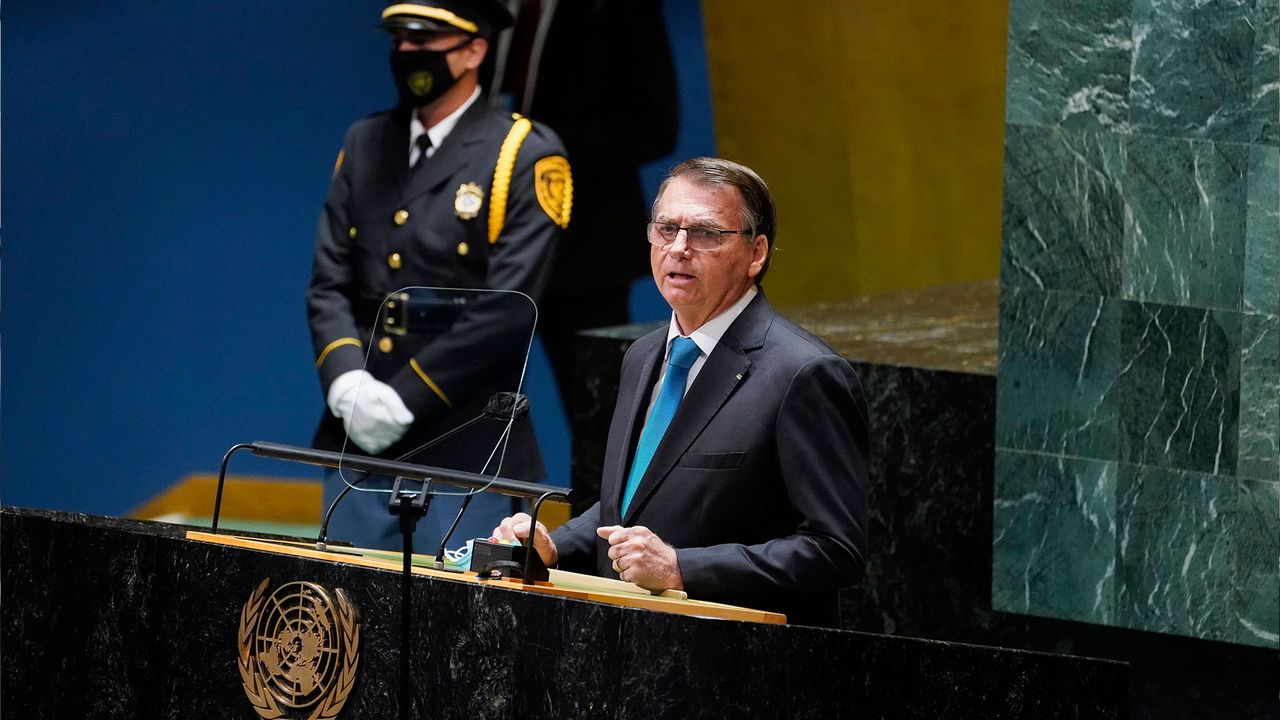 In his speech, Bolsonaro openly justified his threat of a September 7 coup. He has also defended his criminal state policies, in particular his homicidal â€œherd immunityâ€ strategy in response to the COVID-19 pandemic, which has already claimed nearly 600,000 recorded deaths in Brazil. Bolsonaro personified this criminal policy, as he attended the international event as the only speaker who refused to be vaccinated against COVID-19.

The Brazilian president opened his speech by clearly presenting the counter-revolutionary perspective that guides his policies. He proclaimed: â€œBrazil has a president who believes in God, respects the Constitution and his army, values â€‹â€‹the family and owes loyalty to his people. That’s a lot, it’s a solid base, if you take into account that we were on the verge of socialism.

He went on to say that the time when Brazil â€œ[financed] works in communist countries â€has ended and today the country hasâ€œ the largest private enterprise investment partnership program in its history â€.

Based on blatant data distortions, he affirmed his government’s environmental commitment, including the preservation of the Amazon rainforest, the devastation of which he claimed had been drastically reduced. While Bolsonaro said “a 32% reduction in deforestation in August,” the Brazilian National Institute for Space Research (INPE) said that during the first years of his tenure, the average deforestation of the ‘Amazonia had increased by 56%.

Speaking of the COVID-19 pandemic, Bolsonaro fiercely attacked policies based on science and in the interest of preserving human lives. He said “the isolation and lockdown measures have left a legacy of inflation, especially in food around the world.”

The president also said he was opposed to “any mandate related to vaccines” and advocated the use of drugs without scientific evidence against COVID-19, saying “[to be] the one who followed the ‘initial treatment’, always respecting medical autonomy.

At the same time as he was making this hideous statement, a scandal was revealed in Brazil involving the medical company Prevent Senior, which carried out a barbaric experiment on elderly COVID-19 patients, who were given hydroxychloroquine and erythromycin without their consent, causing hundreds of deaths. . These results, in turn, have been falsified to support a “study” claiming the effectiveness of these drugs against COVID-19. Bolsonaro was deeply involved in the organizers of this criminal experiment and has systematically made public its fraudulent results.

Brazilian corporate media called Bolsonaro’s speech and his participation in the UN event a national “disgrace”. It “has no place in the world,” according to an article by Jamil Chade on Uol declared. The press also claimed that the speech was aimed entirely at his far-right national base and that he refused to “speak to the world”.

These assessments attempt to distinguish Bolsonaro as an aberration, a black spot invading the sea of â€‹â€‹roses of fraternal international political relations embodied by the United Nations. The deep hypocrisy of imperialist leaders, like US President Joe Biden, who proclaimed the end of a “period of relentless war” and the opening of a “new era of relentless diplomacy”, is presented by them as the truth the purest.

However, the 2021 UN General Assembly was marked by the announcement, a few days earlier, of the formation of the AUKUS military alliance between the United States, the United Kingdom and Australia. This military deal has exacerbated threats of an impending war against China and exposed the deepening conflicts between the imperialist powers themselves, as unequivocally demonstrated by the unprecedented diplomatic crisis between the AUKUS countries. and France.

While delivering speeches extolling “peace” and “diplomacy” and advocating “humanitarian” policies, the world bourgeoisie is marching blindfolded towards the eruption of catastrophic wars, while advancing at the national level policies of social murder. in response to COVID-19 and widespread crackdown on social growth. opposition.

Regardless of the fact that his peers turn his nose to him, the fascist Bolsonaro is a legitimate expression of the political degradation of the international bourgeoisie brought about by the deep crisis of world capitalism.

Bolsonaro’s attitude of criminal negligence towards the COVID-19 pandemic, known in Brazil as “denial”, is not unique to him either. British Prime Minister Boris Johnson – who this week has been highlighted in the Brazilian press for allegedly warning Bolsonaro that ‘vaccines save lives’ – will go down in history for his infamous phrase:’ No more f … blockades ; that the bodies pile up by the thousands.

Although Bolsonaro focused on promoting his national political conspiracies, his speech aimed far beyond his fascist infantry in Brazil. By attacking socialism, lockdowns and compulsory vaccination, by advocating a chauvinistic policy based on “God and the family”, he spoke on behalf of the fascist forces which are brought forward and integrated into capitalist governments around the world.

Along with the participation of the Brazilian president in the UN event, his son and political advisor, Eduardo Bolsonaro, participated in Tucker Carlson’s reactionary program on Fox News. With the enthusiastic approval of Carlson, Eduardo attacked the Democratic mayor of New York, Bill de Blasio, declaring that he “is a Marxist who largely follows what Antonio Gramsci says”. De Blasio had recommended that Bolsonaro get vaccinated before entering the United States or not to come at all.

Eduardo Bolsonaro was speaking directly to Donald Trump’s support base, who, like the Brazilian president, has called the minimum social distancing measures promoted by governors and mayors “dictatorial” and unleashed a fascist insurgency against them.

Also during the trip to New York, members of Bolsonaro’s entourage, including his Minister of Health Marcelo Queiroga and Eduardo Bolsonaro himself, tested positive for COVID-19. Following his provocations, Eduardo hinted that he was using unproven drugs and, in a Twitter post on Friday, expressed doubts about the effectiveness of the vaccines. He wrote: â€œWe know the vaccines were made faster than the norm. … Does this mean that the vaccine is useless? I do not think so. But this is another argument against the vaccine passport.

The growth of these fascist forces in Brazil and around the world, along with growing social inequalities and the catastrophic development of the COVID-19 pandemic can only be countered by mobilizing the working class at the international level.

In this struggle, the working class will defend the scientific strategy for the global eradication of the COVID-19 pandemic. He should oppose both the blatantly murderous policy of “herd immunity”, which attacks any scientific measure to control the coronavirus, and that of “mitigation”, which admits the mandates of vaccination and masking while excluding social distancing measures that impact capitalist profits and any international collaboration. .