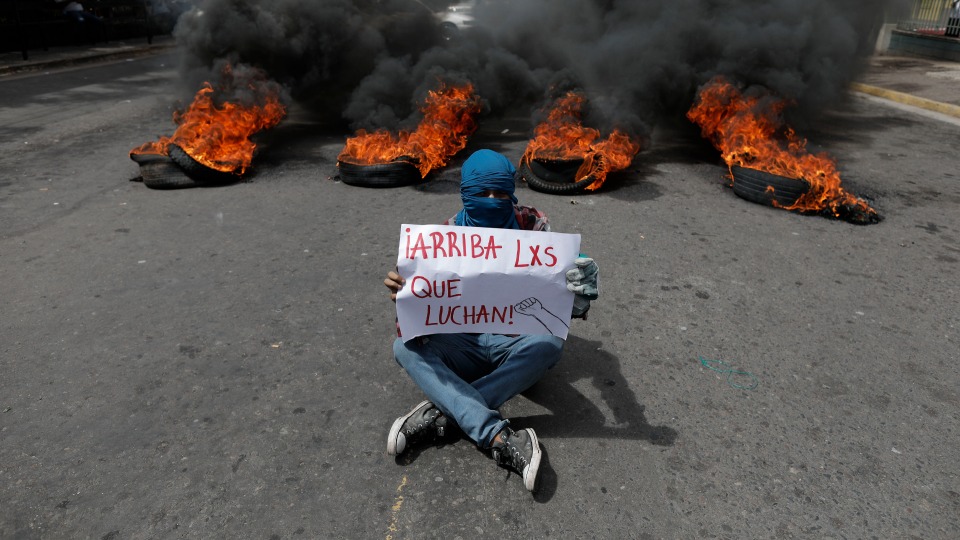 In this October 24, 2019 file photo, a man holds a sign that reads in Spanish “Hurray for those who fight” as he sits outside a street blocked by a burning barricade, during a demonstration to demand the resignation of President Juan Orlando Hernandez, in Tegucigalpa, Honduras. | Elmer Martinez / AP

Chilean author and human rights defender Ariel Dorfman recently paid tribute to Orlando Letelier, the former foreign minister to former Chilean President Salvador Allende. Agents of dictator Augusto Pinochet assassinated Letelier in Washington in 1976. Dorfman noted that Chile and the United States were “on excellent, even obscenely excellent terms (as they are today, shamefully, between the United States). and the corrupt Honduran regime). “

The Honduran government headed by President Juan Orlando HernÃ¡ndez enjoys excellent relations with the United States. The alliance is toxic, however, with capitalism‘s continued grip on an already unjust and dysfunctional society. Hondurans will choose a new president on November 28.

Meanwhile, the US government turns a blind eye to HernÃ¡ndez’s many flaws. These include: fraud and violence marking his electoral victory for his second term in 2017, an illegal second term but for an improvised constitutional amendment, testimony in a US court designating him as “a key player in the drug trafficking in Honduras â€and finally, his designation by US prosecutors asâ€œ co-conspirator â€in the trial convicting his brother Tony for drug trafficking.

Banks and businesses operating in ZEDEs will appoint administrative officers, mostly from overseas and many from the United States. It is they, and not the Honduran government, who will develop regulations and arrangements regarding taxation, courts, police, education and health care for residents.

The first ZEDEs are taking shape now. The idea for them arose in the wake of the 2009 military coup that overthrew the progressive government of President Manuel Zelaya. HernÃ¡ndez, as Congress leader and president from 2014, led their promotion. The Honduran Congress amended the Constitution in 2013 to legitimize the legislation establishing ZEDEs. The recent end of litigation before the Supreme Court resulted in their final authorization.

For most Hondurans, who are treated as if they were disposable, capitalism has its drawbacks.

Honduras’s poverty rate is 70%, up from 59.3% in 2019. Among formally employed workers, 70% work intermittently; 82.6% of Honduran workers participate in the informal sector. The Covid-19 pandemic has resulted in the closure of more than 50,000 businesses and nearly half a million Hondurans who have lost their jobs. Some 30,000 small businesses disappeared in 2020 due to flooding caused by hurricanes.

Violence at the hands of criminal gangs, drug traffickers and the police is pervasive and generally goes unpunished. The victims are members of rival gangs, political activists, journalists, members of the LGBT community and various young people. According to insightcrime.org, Honduras was the third most violent country in Latin America in 2019 and a year later it had the third highest murder rate in the region. According to Reuters: “Honduras has become a sophisticated state-sponsored narco-empire in the service of Colombian cartels.”

Associated with indiscriminate violence, corruption and drug trafficking, Honduran police are dangerous. Eight years ago, President HernÃ¡ndez created the â€œMilitary Police for Public Orderâ€ (PMOP), the Inter-Institutional National Security Force and the â€œTigersâ€. These are police units made up either of former soldiers or of “soldiers … specialized in police functions”. Police in Honduras numbered 13,752 in 2016 and 20,193 in 2020.

The Honduran army has grown. Defense spending for 2019 increased by 5.3%; the workforce has almost doubled. For HernÃ¡ndez, according to one commentator, â€œmilitarism has been his right hand to continue at the head of the executiveâ€. Military forces, like the police, are corrupt, traffic in illicit drugs and are “harmful” to human rights. The imminent presence of the security forces is intimidating as they interfere, often brutally, with votes, protest demonstrations and labor strikes.

According to Amnesty International, â€œThe government ofâ€¦ HernÃ¡ndez has adopted a policy of repression against those demonstrating in the streetsâ€¦ The use of military forces to control protests across the country has had a deeply worrying human rights impact.

The US government has provided training, supplies, and funding to the Honduran police and military. Soto Cano, a large US air base in eastern Honduras, periodically receives between 500 and 1,500 troops who undertake short-term missions throughout the region, allegedly for humanitarian or drug war purposes.

Not only is there severe oppression but, according to Reuters, a severe five-year drought has decimated staple crops. â€œNearly half a million Hondurans, many of them small farmers, are struggling to get food on the table. The United Nations agency responsible for humanitarian affairs, OCHA, reports that in February 2021, “the severity of acute food insecurity in Honduras reached unprecedented levels.”

For the sake of survival, many Hondurans follow the path of family and friends: they leave. Among the Central American countries, Honduras, followed by Guatemala and Mexico, recorded the highest emigration rate between 1990 and 2020. The rate increases were 530%, 293% and 154%, respectively. Between 2012 and 2019, family groups arriving from Honduras and apprehended at the US border increased from 513 in 2012 to 188,368 in 2019.

The destruction of Honduras by US imperialism follows a grim pattern, but is also a special case. Migration rates from Central American countries to the United States correlate directly with the levels of oppression and deprivation in these countries. When it comes to hope, the correlation is reversed.

The different apprehension rates of Honduran and Nicaraguan migrants on the southern border of the United States are revealing: Honduras steeped in capitalism specializes in oppression, while optimism is no stranger to Nicaragua aspiring to socialism. .

Figures from the Department of Homeland Security show that between 2015 and 2018, the annual average number of Nicaraguans apprehended at the border was 2,292. The comparable figure for Hondurans was 63,741. Recently, the number of Nicaraguan migrants has increased. ; 14,248 arrived at the border in 2019, as did 268,992 Honduran refugees. The difference cannot be explained by the population of the two nations: this year the Honduran population reached 10,104,920 and the Nicaraguan population reached 6,724,836.

Recent reflections from Carlos Fonseca TerÃ¡n, international secretary of the Sandinista National Liberation Front (FSLN), show why hope persists in Nicaragua. He points out that since 2007, poverty, inequality, illiteracy, infant mortality and murder have dropped sharply. Citizen security, electrification, renewable energy sources, women in government, health care funding and the minimum wage have increased dramatically. Fonseca adds that â€œthe percentage of the GDP producedâ€¦ under associative, cooperative, family and community ownership has increased from less than 40% to more than 50%.

As they taught us in school, contrast and compare.