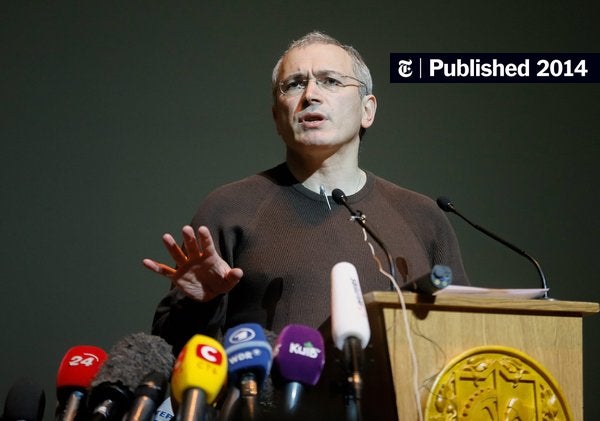 He said only a fraction – he estimated 12% – of Russians are currently oriented towards Europe, but he hoped to convince many others that they should be too.

“I see that I could perhaps offer myself to the European part of the population as their political representative,” he said. “I don’t know if it will work or not, but I will try. “

He expressed some reluctance to become the leader of Russia himself. “I really hope they find someone else,” he said. “Historically, the person in charge during the transition period most likely ends up in prison.”

Then he added, laughing, “I’ve had enough.

The idea can be fancy anyway. Oligarchs like Mr. Khodorkovsky, let alone those of Jewish descent, have never been particularly popular in Russia, where they are accused of stealing state property before Mr. Putin’s rise to power.

Moreover, Mr. Khodorkovsky has not dared to return to Russia since his release. Nezavisimaya Gazeta, a Russian newspaper, wrote after its latest announcement that “the most notorious political refugee risks being portrayed as the enemy of the country”.

But his supporters said he shouldn’t be underestimated. And those he met in Washington were struck by his determination. “I have to say I’m impressed with him,” said David J. Kramer, president of Freedom House, which promotes democracy and human rights around the world. “But he’s still looking for how he can make a difference. And it is obviously very difficult to do from outside the country.

He arrived in Washington with some of the same entourage he had for many years, including his lawyers, Anton Drel and Maria Logan, and his longtime translator. Her son, Pavel, 29, who was living in the United States when his father was arrested and then founded his own group to defend civil society in Russia, was seated at his table during the Freedom House dinner.